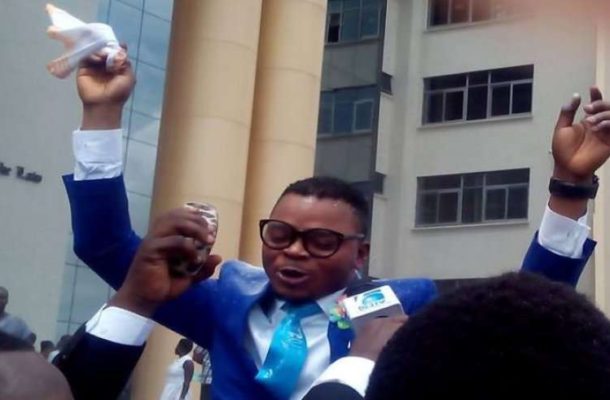 The beleaguered founder of the International God’s Way Church who was expected in court today did not make it.

His Lawyer, Samuel Atta Akyea has not communicated the reason behind their failure to appear before court but it is speculated among law enforcers the decision was a unanimous one between all parties involved in the law enforcement process.

The Accra Central Divisional Police Commander, ASP Maame Yaa Tiwaa Addo Dankwah has however dispersed the police personnel who were assigned to the court ahead of Obinim’s arrival.

She explained her action was influenced by a higher command.

High police security was needed at the court to avoid an instance where supporters and church members of the miracle worker would throng the court premises to cause mayhem.

On Wednesday August 24, thousands of Obinim’s supporters besieged the Nima police station where the pastor was held, chanting and praying for his release.

The police have had to resort to the use of water cannons to disperse the crowd.

The pastor is facing charges of physical assault and verbal abuse for lashing two of his church members in a service after accusing them of committing fornication.

Obinim was invited by police over the flogging but was arrested for an alleged fraud case after his statement was taken and he was charged in the earlier matter.

One Bismark Kusi, a businessman, had filed a complaint with the Criminal Investigations Department (CID) accusing the controversial bishop of refusing to refund an amount of GHC11.6million he handed him in November last year.

CID Spokesperson ASP Joseph Benefo Darkwa who revealed the reason behind the arrest said the businessman complained that he had given the money to Bishop Obinim to spiritually bless it.

He was also charged with physical abuse and verbal assault for publicly flogging two of his church members with a belt, after he accused them of committing fornication

He was shuttled between the Nima police station, the CID offices at the police HQ in Accra and the BNI offices.

His lawyer, Samuel Atta Akyea said his appearance in court today is for the charges of verbal abuse and physical assault only.

He says the allegations of fraud remain a “speculation” until the said victim comes forward to give a statement.

He also said he believes his clients fate is but of a grand scheme” by the realm” to cover up some happenings in the country.

According to him, his client is being used to create a decoy for a more serious matter of constitutional significance – the Montie 3 saga.

“The National security and the BNI who deal with information management…they know how to manage information, take attention from certain important matters,” he told Accra based Joy FM on Wednesday.

“It helps them to divert attention from what matters in the system,” adding “the melodrama makes me believe it is information management”.