Obinim runs away from court 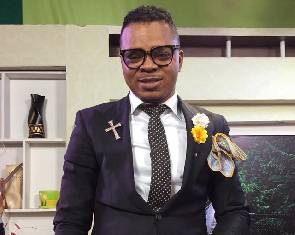 It has emerged that controversial Pastor, Bishop Daniel Obinim who has been sued by renowned human rights lawyer, Francis Xavier Sosu, for publicly flogging his amorous adopted son and daughter has hidden himself, making it difficult for him to be served court summons.

Lawyer Sosu on Friday filed a suit against the eccentric man of God, saying he was convinced that the Obinim had violated the dignity of his adopted children and also dehumanized and degraded them, an act he believes is in contravention of Article 15 (1) and 15 (2) respectively of the 1992 constitution.

The controversial pastor ignited public outrage after he was seen in a video flogging the pregnant girl and her boyfriend. Infuriated by the couple’s lustful actions which resulted in a pregnancy, Bishop Obinim beat the youngman on his bare back with his belt before turning to the girl flogging her mercilessly in the full glare of his congregation.

During the beating session, Obinim is heard questioning the jobless youngman why he got the girl pregnant when he has no finances for her upkeep and the upbringing of the unborn child. The girl who was unable to stand the flogging attempts to escape, but she was held by a right-hand man of the Bishop to enable the bishop to subject her to more beatings.

After that, Obinim instructed his junior pastors to remove their belts and subject the couple to more flogging.

Lawyer Sosu in an earlier interview with Kasapa News said he wants the maverick pastor to answer questions in court for infringing on the human rights of the ‘couple’.

“We want the court to make a declaration that the conduct of Obinim in flogging his church members in the open violates their dignity, again that conduct amounts to a dehumanizing and degrading treatment, and also praying the court that Obinim’s conduct violates Ghana’s obligation under the UN convention on the Civil and Political rights of people. After that we’ll further pray the court that it restrains Obinim and his church from further violating the rights of Ghanaians in that manner because there are several documentations to the fact that Obinim has violated the rights of some of his church members in the past including stepping on a pregnant women ostensibly healing her.”

But Lawyer Sosu has disclosed that although Bishop Obinim’s church has been served, he (Obinim) has not availed himself to be served legally.

“Obinim has been evading service since Friday, however his church the International God’s Way Church has been served. I’m hopeful that by early next week he’ll be served for the case to begin in court.”

Meanwhile the Ministry of Gender, Children and Social Protection has filed the report at the Accra Regional Domestic Violence and Victim Support Unit (DOVVSU) Office for investigations to be conducted into the incident.

“We have been informed; that the Police have commenced investigations into the matter and a complaint has also been filed against him at the Tema Regional Police. We will keep you posted on further developments,” Nana Oye-Lithur wrote Thursday.

Also, Amnesty International Ghana has called for an immediate arrest of the Founder and General Overseer of the International God’s Way Church, Bishop Daniel Obinim.

Meanwhile, Bishop Daniel Obinim has been speaking on the matter.