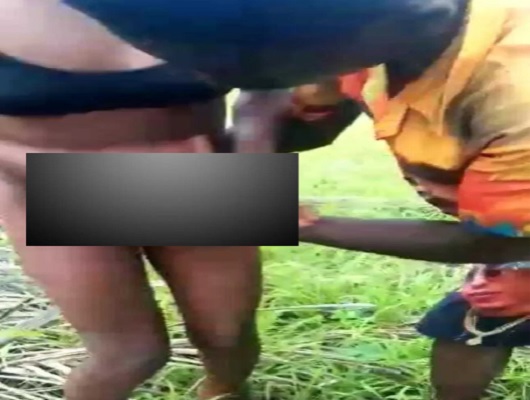 One of the boys inserts his finger into Jessica's private part

A 15-year-old girl has been subjected to severe beatings at Akyem Ofoase in the Akyemansa District of the Eastern Region after she was accused of sleeping outside of the home.

Jessica, [not her real name] was beaten to a pulp by two young men from the community whose services were allegedly hired by the girl's step-father, one Kofi Owusu, to carry out the unwarranted action on her. 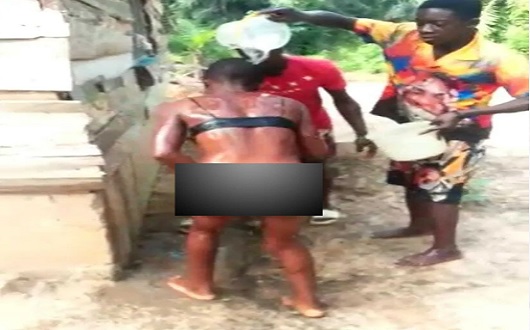 This portal understands Jessica was not only flogged by the boys but she was also stripped naked and had her private part being tempered with by her attackers as a punishment, all under the supervision of both the step-father and her biological mother, Sarah Frimpong.

The boys are said to have recorded the act and subsequently circulated it on social media with the aim of shaming Jessica whom they say is chasing men at a very thunder age. 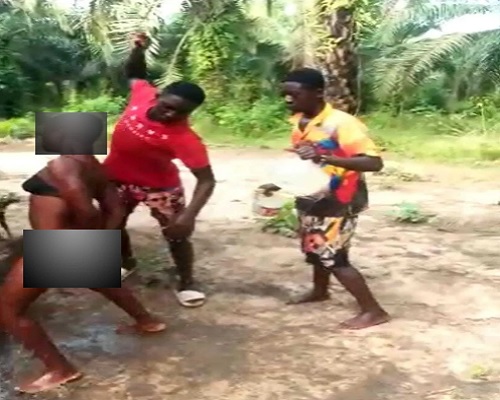 How it all happened

Jessica reportedly left home last week Saturday  and did not return home until the next morning (Sunday).

It said upon her arrival, one of the boys named Simeon rushed her with a bucket full of cold water and poured it on her claiming he was baptizing her to deliver her from the spirit of chasing men.

She was then stripped naked and flogged. She run to a palm plantation nearby but the boys accosted her and allegedly attempted to have sex with her which she resisted. The stepfather also followed up to the bush and allegedly beat her up mercilessly.

Until the video leaked online, residents of the Ofoase community had heard nothing about the incident. Jessica has reportedly become the topic on everyone's mouth, bringing her the shame she least expected. 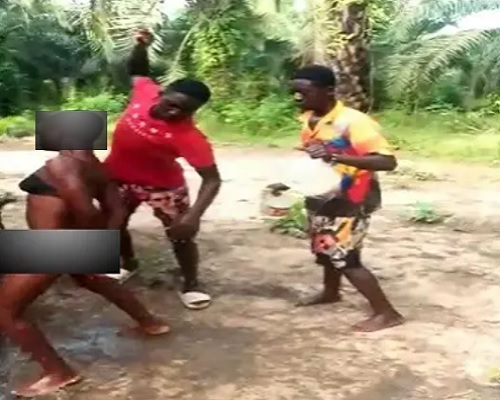 Jessica's uncle who is domiciled in South Africa after being informed about the incident says he has reported the matter to the police in Ofoase but they have failed to make any arrest on claims that their family head has asked to resolve the matter at home since it is a family issue.

He disclosed the young girl has suffered bruises all over her body as a result of the attacks and the "heartless" parents have refused to send her to hospital for treatment.

He said Jessica is traumatized and emotionally hurt as a result of the incident, and therefore calling on the IGP and Human Rights activists to take the matter up and seek justice for the poor girl over the hash treatment meted out to her.