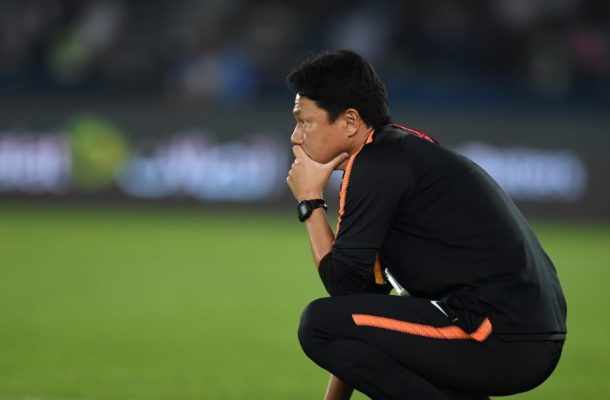 
For the second time in two years, Kashima were beaten in the competition by Real, though Wednesday’s clash in Abu Dhabi saw a more comfortable victory for Los Blancos than the 2016 final in Hiroshima.

Despite facing a star-studded Madrid line-up, Oiwa had insisted before the game that he would set his team up to attack.

But after a promising start, Kashima faded and were ultimately overpowered by the European champions, who were inspired by a Gareth Bale hat-trick at the Zayed Sports City Stadium.

“Soon after the match started we had chances, but we couldn’t finish,” Oiwa said in his post-match press conference. “If we scored, the result would have been different.

“We let the momentum go, we gave mental room to our opponents and we allowed them to take the lead. I am disappointed.”

Oiwa admitted that his players focused too much energy on trying to shackle Real Madrid and not enough on taking the game to their opponents.

He said: “I take the responsibility for winning and losing. We could have controlled the game better but our attacking players spent more time defending, which affected us heavily. As a result, we didn’t have enough attacking play.”

The Abu Dhabi crowd appeared firmly on Real Madrid’s side – unsurprising given the club’s popularity in the Middle East. But Oiwa did not feel the partisan support played a key role in Kashima’s defeat.

“I don’t think there was any negative impact from the Real Madrid fans,” Oiwa explained. “There were many Japanese fans who came to support us too. The goal conceded in the first half gave the momentum away.”

The AFC Champions League winners must now face River Plate in a third-place playoff on Saturday, while Real Madrid take on Al Ain in the final.

And despite facing a surprise package in Al Ain, Real Madrid head coach Santiago Solari insisted his players will not be taking their opponents lightly as they vie for a record-breaking fourth FIFA Club World Cup title.

“We will have to be as competitive as today to win the trophy,” Solari said. “There is little time between now and the next match, we have less time than our opponent, but we have to recover from tonight’s game.

“We should not take it [Al Ain] as a shock because it often happens in football. At this level there’s no bad or regular team, all teams are good and excellent.”