Okada accidents expose the shallow-mindedness and visionless state of Mahama 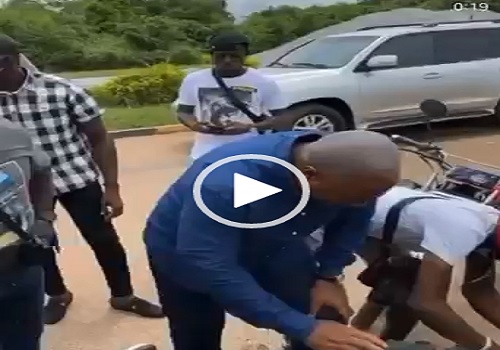 “The evil that men do, lives after them." The shallow-mindedness and visionless state of a malicious person will for the rest of their days in the land of the living haunt and expose them as nobodies but dangerous persons unworthy of the trust of intelligent human beings.

Former president John Dramani Mahama in his dire quest to stage a comeback to the presidency in the days, weeks and months leading up to election 2020, made lots of whimsical and populist electioneering promises. Among the promises so made in his desperation to regain power in what he termed as coming back to correct his mistakes were;

1.To legalise Okada, thus, permit motorbikes to be used for commercial transportation.

2.To allow for illegal surface and alluvial mining (galamsey) to intensify by letting as many people as they want to enter into that industry.

3.To give back the consolidated banks and the shutdown Savings and Loans microfinance organizations to their owners.

The above cited promises are a few among many such promises made to the Ghanaian electorate with the ulterior motive of galvanizing them into voting to elect him as the President of Ghana and his NDC to form the next government.

Not willing to go into the nitty-gritty of his many thoughtless promises and malicious actions bordering on pure criminalities, let me briefly discuss the first two points listed above and their repercussions on Ghana.

Many discerning Ghanaians assert that the Okada industry has somehow augmented armed robberies in Ghana. It is also one of the principal causes of fatal accidents in Ghana. Many a time has a motorbike been knocked over by a car, leading to the death of the rider and their passenger.

Again, some brazen diurnal (daylight) and nocturnal (night) armed robberies have been effected using motorbikes as get away vehicles. The public will bear me witness to this fact.

While it was the wish of the NPP government to scale down the use of Okada in Ghana to save lives and to reduce the incidents of armed robberies effected by motorbikes, former president John Dramani Mahama and the NDC were promising to legalise and encourage more people into the Okada business. What an ideal vote-garnering but populist initiative, by a visionless person aspiring to come back to govern Ghana.

On Sunday, July 4, 2021, I received a video and a message on my WhatsApp contact page regarding the motorcade of former President John Mahama running over or knocking over two Okada riders. He did well to attend to the injured. However, he was calling for ambulance to convey the injured to hospital.

When he was campaigning for Okada riders’ votes by promising them the legalization of their activity, the big mind, president Nana Akufo-Addo, and his Vice President, were promising to provide the Okada riders a better mode of a four-wheel vehicle to provide them much safer jobs and to save their lives from unnecessary and preventable deaths.

He who criticised the provision of the ambulances and has made it his habit to denigrate the president and his well-thought-out policies and programmes, was seen frantically calling for ambulance to transport the Okada drivers his motorcade had knocked down.

It is too obvious the dangers galamsey poses to the nation’s water bodies, virgin forests and fertile and arable lands. When President Nana Akufo-Addo decided to stop the devastation the galamsey is causing to the nation by stopping such activities, former president Mahama and his NDC faithfuls were going round the country promising the miners free licence without limitations to execute their activities without fear of arrest or prosecution.

It is only a clueless, visionless, corrupt and an incompetent person who does not know the usefulness of water and fertile and arable land and forest as means of sustenance of human life on earth. While president Nana Akufo-Addo was putting his job on the line to save the nation and the lives of people, the visionless former president John Mahama was promising otherwise, thus, the augmentation and ramification of the illegal mining activities.

He could not be bothered, whether there will be potable water in the country for people to drink, fertile and arable lands for farming and forests to encourage rainfall or not.

Whatever former president Mahama is doing to the good people of Ghana and president Nana Akufo-Addo, “na God go pay him”

For graphic explanation of the song, let me go for the remix by Tilda and the Rocafil Jazz.

It suffice for former President John Mahama and the NDC to see any chance of winning the hearts of some people to get their votes, they jump to rally behind them, incite them and give them promises, regardless of how their actions may be devastating to the nation and the entire citizens in the end.