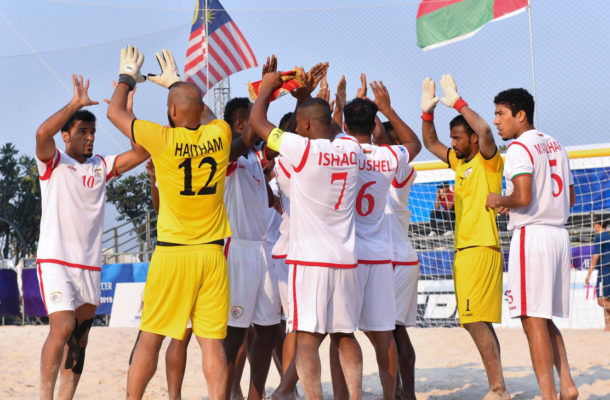 Pattaya: Oman achieved a third qualification to the FIFA Beach Soccer World Cup after they beat Palestine 2-1 on penalties following a 2-2 draw to claim third place at the AFC Beach Soccer Championship Thailand 2019 on Sunday.


Oman had been 2-0 down with just eight minutes remaining, but a rapid-fire brace from Sami Al Bulushi forced a shootout, with Talib Hilal's side prevailing in dramatic fashion.

Having reached the semi-finals for the first time, Palestine's loss means their dream of a maiden Beach Soccer World Cup appearance in Paraguay ends in heartbreaking fashion at the final hurdle.


With a first ever World Cup ticket on offer, Palestine began competitively, and came close to scoring through Islam Abuobayda's second-minute overhead kick, which struck the outside of the post.

The Palestinians had been nullified in their 6-0 semi-final loss to Japan, but here they they had a renewed enthusiasm, with Fady Jaber and Mohammed Hassan drawing saves from Omani goalkeeper Haitham Showan, and the dangerous Maisara Al Bawwab shooting narrowly wide.

Their pressure finally paid dividends with just over a minute remaining in the opening period, with Abuobayda finding enough space to beat Showan with a close range header, and give his side a 1-0 lead at the first break.

Despite producing a number of their own efforts at goal in the first period, Oman were rarely able to test Jaber but the Palestinian shot-stopper was on his toes to deny Khalid Al Oraimi in the 14th minute, and made another save from Sami Al Bulushi's volley four minutes later.

But just as the Omani pressure was building, Palestine scored a scarcely believable second in the 20th minute through Fadi Al Arawi, who intercepted goalkeeper Amjad Al Hamdani's long throw, and - with his only touch - managed to steer a powerful long-ranger header directly into the back of the net from behind the half-way line.

Jaber continued to repel Oman's attacks, denying Al Oraimi and Yahya Al Araimi in quick succession, then nearly found the net himself; with Al Hamdani at full stretch to deny his long range effort as Palestine took their 2-0 lead into the final period.

Oman had 12 minutes to keep their dream alive, and they pulled a goal back within four, after Palestine switched off to allow Al Bulushi to find the back of the net with a close range header in the 28th minute.

With Palestine starting to tire, Talib Hilal's team were now attacking relentlessly, and - when Al Bulushi produced a superb back-heel to score his second in three minutes - Oman were level with just five minutes on the clock.

Jaber denied Al Oraimi, before preventing Al Bulushi from scoring his hat-trick in the 33rd minute, before Al Hamdani's fingertips denied Al Arawi a minute later, but despite a grandstand finish, neither side could find the winner in regulation time.