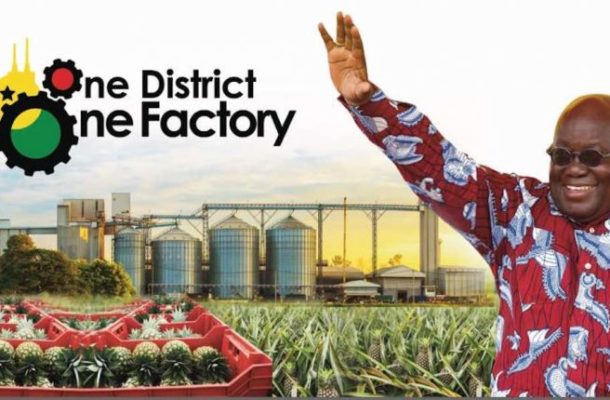 A founding-member of the governing New Patriotic Party Dr. Nyaho Nyaho Tamakloe has said the one-district-one-factory policy of the government will fail.

This is because, he believes, the fundamental steps being taken towards the construction of the factories are wrong.

“That program will fail just watch it, because the people wouldn’t know how to handle it. It must come from within the people themselves so they can manage it; you just don’t go and set it up a factory and expect that it will succeed, but the way they are going about it, it will fail,” the retired military captain told Bola Ray on Starr Chat Wednesday.

“Ghana beyond Aid is such a False Statement and it’s impossible to achieve that. We are still begging as a nation,” he noted.

Commenting on Ghana’s relationship China, the diplomat said government is hurting local businessmen to the benefit of the Asian giant.

“The damage that China has done to this country over the past years shows that we are dealing with the wrong people. What Zambia is going through with China is a big lesson for any African Leader dealing with China. We have Ghanaian engineers who can manage the bauxite in this country

Meanwhile,Trade and Industry Minister, Mr. Alan Kyerematen, has said factories to be built under the ‘One District, One Factory’ policy initiative by the NPP are not to be owned by the State and will partake in commercial activities as legal entities created by private investors.

“When we talk about one factory in every district, this is not to mean that government is going to establish State enterprises,” the minister stressed.

Speaking at the National Policy Submit in Tamale, he added that the One District, One Factory programme has a “critical distinction” in concepts, requiring the “participation and enthusiasm of business people to make it work, unlike the Free Senior High School, Planting for Food and Jobs, National Health Insurance, which are fully funded by government.”

“So unlike other government programme where government actually in the driver’s seat and government is using its own resources to fund its programme – Free SHS, Plating for Food and Jobs, National Health Insurance, this ‘One District, One Factory’ is very different”.