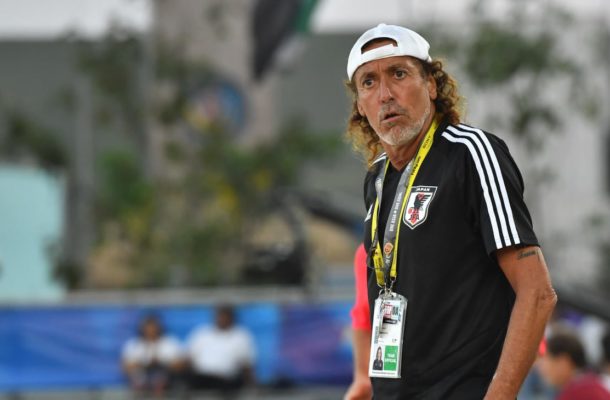 Pattaya: Born in Rio, made in Tokyo, and at home on the beach, Ruy Ramos is one of a kind, and one game away from leading Japan to the AFC Beach Soccer Championship Thailand 2019 title.


With Friday's 6-0 win over Palestine stamping their ticket to a tenth successive FIFA Beach Soccer World Cup, the East Asian beach soccer powerhouse is now focused on becoming the kings of the Continent.

The team is fuelled by the burning desire of Ramos, who arrived in Tokyo as a young footballer trying to make his way in what was a vastly different sporting climate, in 1977. Now 42 years later, he still calls Japan home.

"While I was in Brazil I made my debut at 18 years old," he told the-AFC.com.

"When I was 20 a scout from Japan came and saw me play, and decided to bring me to Japan."

Since his first taste of Japanese football, with Yomiuri FC (now Tokyo Verdy FC) in the Second Division of the Japan Soccer League, Ramos has gone on to experience a unique career, which has included a rare combination of roles.

He featured over 350 times in the Japanese club game, becoming a star both before and after the establishment of the J League, earning 32 caps for the national team and winning the AFC Asian Cup in 1992.

Ramos, who grew up in the global epicentre of beach soccer, believes Japan's proud history in the barefoot game is a testament to the influence of Brazilian football culture.

"Beach soccer was born in Brazil," he said.

"Even before the World Cup, they had world competitions, and I was invited to appear as a player there. Japan and Thailand were invited to the first FIFA World Cup (in 2005), and from there it has grown.

"I love beach soccer, I love futsal. There are many influences in Japanese football from Brazil."

Indeed, the footballing ties between the two nations go back decades.

Countless Brazilians have shone in the J League, naturalised stars such as Ramos, Alessandro Santos and Wagner Lopes have represented the Samurai Blue, and the never-ending professional career of Ramos' former teammate Kazuyoshi Miura began in the state of Sao Paulo.

The connection between the nations continues into the modern era in beach soccer, with Japan captain Ozu Moreira, born in Rio de Janeiro and naturalised in 2012, considered one of the world's best players.

Ozu has contributed eight goals and four assists in five matches in Thailand, and leads the scoring charts alongside teammate Shusei Yamauichi.

"At this point for Japan, without Ozu, it would be a different story," declared Ramos. "Ozu loves beach soccer and Japan.

"He had a chance to come to Japan during the second time I was in charge as the head coach and he was asking me to be part of the team.

"I took him to the World Cup as a coach. He helped a lot for the development of beach soccer in Japan. I suggested to the JFA that we help Ozu get a Japanese passport and play for the national team.

"At the time he had a choice to represent us or the Brazilian national team, but he chose Japan, and Ozu has been giving help in many, many ways to beach soccer in Japan."

Ozu is just one of several quality players in the Japanese beach soccer outfit, which has benefitted from becoming World Cup ever-presents, appearing in every edition of the tournament since 2005.

While Ramos has been in charge on several of those occasions, he also held coaching jobs at professional clubs in the 11-a-side game; taking the reins at former club Tokyo Verdy in 2006 and spending over two years in charge of second-tier FC Gifu from 2014.

"Beach soccer and football, it's very different," he laughed, breaking momentarily into English before returning to Japanese.

"Fundamentally, it might be the same in terms of logic, but beach soccer is easier for me because there are less players to manage. Implementing the mindset, the strategy, the tactics, everything, it is better with a small group. It's easier to manage.

"In any sport there's a barrier to break through, but for me it is easier to have this influence with less people."

If one thing can be gleaned from Ramos in this year's edition of the AFC Beach Soccer Championship, it's that he is a perfectionist.

Big wins over Kuwait (8-1), Qatar (7-1), Bahrain (6-2) and Palestine (6-0) have all been met with disappointment by Japan's head coach, with only their 3-2 extra-time win over defending champions Islamic Republic of Iran on quarter-final day eliciting a positive reaction.

Ramos said he sets high standards because that is what is required to reach the level of success the team craves, and believes it is the result of the mix between his personal ethos and Japanese culture.

"It's both," he said. "I can have a personal style, but if you don't understand the culture you will not change anything.

"I know it's something that doesn't look normal - when we're winning 7-1 and I still look super angry - but it has to be that way, because we have to keep the tension and have to be better.

"We can't just be relaxed because we're winning. It's part of the Japanese character. You have to keep hitting hard.

"The reason I'm doing it like this is because I'm not only here to fight with Kuwait, or Iran, or whoever - I'm aiming to be the champion at the World Cup, and my character is working with Japanese culture.

"That is Ruy Ramos."