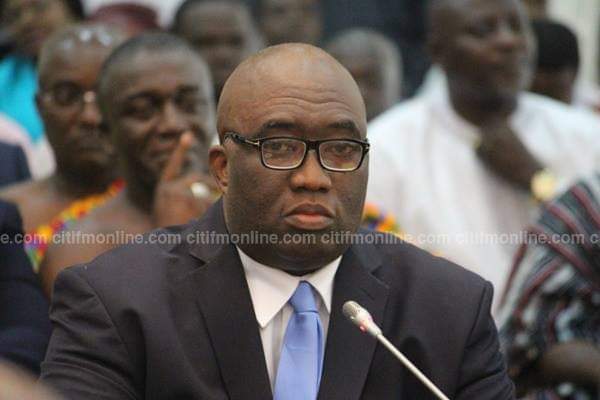 In Ghana’s politics today, the most honest, electable, competent and politically unbeatable of likely 2024 contenders is Hon Ghartey, member of Parliament for Essikado Ketan Constituency

African railway infrastructure space recognised him as the hand that raised Ghana’s railway from death. Hon Joe Ghartey, academic, scholar and politician was a star boy in President Nana Akuffo Ado’s first term cabinet. While his rising profile was too intimidating for some forces within ruling NPP, his sterling records of service and his rich political records are unforgettable in the search for 2024 succession. Out of cabinet, the former deputy speaker of Ghana’s Parliament is garnering unsolicited awards and honours nationwide.

In Ghana’s politics today, the most honest, electable, competent and politically unbeatable of likely 2024 contenders is Hon Ghartey, member of Parliament for Essikado Ketan Constituency. A sterling performer in Akuffo’s first term, he urgently declared his interest in the Presidency to avoid playing the ostrich. While the President was pressured to remove his favourite Minister, recent happenings must have tutored the President that Ghartey is a true friend rather than enemy.

The lines some local voice did not want to hear is the truth. Hon Ghartey had mid-December spoke from political sincerity and courage: “There’s only one truth. I contested for the last election and I came third. Akufo-Addo came first and Kyeremanteng came second and I was third. 2024 if God permits I will stand for the President of Ghana”. The statement was in response to internal reading within the ruling party of likely contenders for 2024.
The reality for the ruling party now is that the President is widely distracted. President Nana Akuffo Ado must by now have confirmed identities of his real detractors.

Supporters of Minister of Trade and Industry Alan Kwadwo Kyerematen and Vice President Dr Mahamudu Bawumia are combatively daring a newly elected President who is barely four months into his tenure in office. They are sabotaging government while they pretend to be loyal to the President.

Certain notions about 2024 succession is also ridiculous. A recent writer while reviewing the scheming noted as follows: “The notion that a person who became running-mate before he got a party membership card should feel aggrieved if he is not made the flag bearer, regardless of competence, religion or ethnicity is an insult to other party members of equal ability and greater dedication who have served the party since its founding without ever holding any office. Parties exist to win power so they can govern. In choosing candidates, there are only two legitimate considerations– Electability and then, Competence so that when elected, their performance would make their party more electable in future elections”. I can’t agree more.

And back to the recent award, the organisers had this to say about the awardee: “The next awardee is also a lawyer and a politician. He took up a job as an associate at a chamber of lawyers in secondary year. He later joined a firm of a kufre and co, a leading law firm in Ghana, which was co -founded by his future colleague parliamentarian, and cabinet minister in the John Kufur administration, Nana Addo Dankwa Akufo, the current president of Republic of Ghana. As a speaker and a teacher, he has also lectured in various fields of law and investment. He was an adjunct lecturer of investment law at the University of Ghana Business School. He has also served as Lecturer in corporate governance and Executive MBA at the Ghana Ec of management and public administration.

“He’s currently the Member of Parliament for a constituency in the western region. He was first elected to the seat in December 2004 elections, and was re-elected in December 2008, December 2012, December 2016 and December 2020. He was appointed Deputy Attorney General and Deputy Minister of Justice in 2005. He was promoted and appointed substantive Attorney General and Minister of Justice in 2006, a position he held on the January 2009. The Ghana ministers of state excellence honours recognises his remarkable achievements as a former Minister of State for his stellar performance in the course of his duties”, the organisers narrated.

Responding to the award, Hon Ghartey stated as follows: “In the second term of President kuffur before I was a deputy Attorney general for one year, and from 2006 to 2009 I was Attorney General Minister for Justice. When we came into the minority , I was made the second deputy speaker of parliament. When we came back into government, I was the First Minister of railway development of the Akufor Addo government, from 2017 to 2020. We started off the Parliament with Ministry of Railway Development within our office for about five, six months with our staff. We started off with parliament, and we did our best and we are happy that the people have recognised the effort.

“We thank God for opportunities. And we thank the President for that appointment. I thank the organisers for this award. I asked about how they came to their conclusion and they said it involved screening and submissions from the general public as well. So I thanked the general public for recognising what we tried to do. It is gratifying to know that when you’re in your small corner working, some people are noticing what you’re doing. I thank the good Lord, for his mercies still endure, ever faithful and our faithful, ever sure. I thank the President for his appointment I thank the people of Ghana for their patience. And then, my family, for their endurance and not to forget all the people that I worked with, sometimes close at midnight so I know I’m difficult to work with because we never rest and we are going to continue to put in our better, best. That’s how we go. That’s how we are continue to be. So, the people who I worked with all the team directors, Baba, the security man who had to stay awake when I was never going home we thank all of them. God bless you. Thank you”, Ghartey said in appreciation.
Awards apart, it is smart to say the day is still young. The incumbent President may actually be regretting exempting a truly hardworking, tested and result-oriented scholar from his cabinet. More awards definitely on the way for the star boy.

Olawale Rasheed writes from Abuja ,Nigeria and can be reached at Rasheedolawale24@gmail.com