Open letter to the Speaker of Parliament 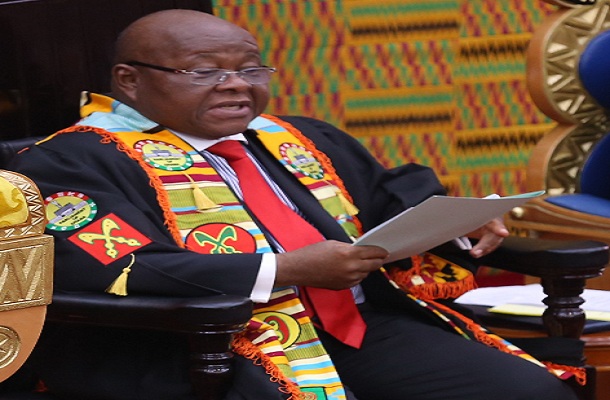 Dear Mr. Speaker
EVERYTHING FOR MAJOR MAHAMA'S WIFE AND CHILDREN ALONE? WHAT ABOUT US?
Mr. Speaker my heading may sound rhetorical but forgive me because that is what happens when you find yourself in an animal farm like our country Ghana, where all animals are equal but some are more important than others to an extent that a whole parliament can sit down to make a law to cover the family of one person who died in line of duty and leave the rest who also died in similar circumstances. It's sad to be a security officer in Ghana particularly a police officer and it is about time we resolve this issue once and for all, else we will one day plunge this country into a serious crisis if we continue on this tangent of discrimination and unfair treatments, particularly among security officers. The police officer is also somebody's son or daughter. He or she was not sculptured.

Mr. Speaker, as usual my is name is No. 44679 G/L/Cpl Daniel Kwofie also known as Ahanta Apemenyimheneba Kwofie III currently stationed at Abokobi as a police officer. I remember I wrote a similar open letter to your predecessor on the same issue and the need to take care of wives and children of police officers who have died in line of duties since they are grossly neglected by the state. I am notoriously known for my open letters on issues bothering my mind as a police officer so I am facing many trials in the police but the Lord God is my strength. We cannot continue to die like that when laws are being made selectively to suit just one person when I thought it was an opportune time to frame a law in memory of the late Major to cover every security officer who dies in line of duties?

Mr. Speaker I know you are a reverend minister and a man of God so you will reason into what I am saying with the spirit of God and not with the flesh or a carnal mind. The Akans say that if you want to tell God something, say it into the air and God will hear it so, I have decided to do exactly that at Abokobi. I am pouring my heart and griefs out at Abokobi and I know definitely that the spirit of God will deliver this my open letter to you safely without a hitch wherever you are. Just ponder over it with the spirit of God and I believe you will understand how parliament has treated us unfairly and discriminated against us as well.

Mr. Speaker, when I heard that Major Mahama Trustfund bill was passed into law awaiting presidential signature, tears dropped from my eyes and I was saddened as a police officer. My heart missed a beat, and I felt a sharp pain in my spine as shivers run through it. I almost became paralysed with high fever. I have since resolved to resign from the police service in protest of this law which I see to be unfair and very discriminatory not to only members of other security services but even to the military fraternity which the late Major was a member. If nothing at all, the Trustfund should have covered members of the military just as the principles of generality, equality and fairness demands in every democratic dispensation when laws are being made.

Yes ! May be I will have to pack bag and baggages to Apemenyim my home town in the Western Region and start some farming there before I come across a bullet and be wasted like my fellow police officers who have died in line of duties and their wives and children are suffering like "Bonga" even though regulations 80 of the C.I 76 makes a categorical provision for them. My wife just gave birth to a bouncing baby boy and I want live to see my son growing up though death they say is inevitable but in event that I should be caught up in a cross fire and dies as I perform my legitimate duties, what will happen to my new born baby and my wife? Who will take care of them when I am gone? I personally grew up as an orphan and cannot afford my son to go through the hardships I went through whilst growing up so you see my worries now?

I sometimes see some of the police wives who have lost their husbands in line of duties and I put my hands on my head and wail aloud because the same fate awaits my family should I die in line of duties. I always ask myself is it a crime to serve my country as a police officer particularly a junior rank? I recently watched a documentary in America where a common dog was given a full military and honourary burial and I was shocked to the marrow. A dog being treated as a national hero? The case is very different here in Ghana, where laws can be made to protect those who already have enough to eat and forget we the poor who are rather hungry. Is that how we are going to waste our lives in the police whilst laws are selectively being passed to protect one person's family and leave the rest who have suffered the same fate? It's sad Mr. Speaker.

Mr. Speaker, on 8th June 2017, I wrote an open letter to the president and I am currently facing a trial and would probably be dismissed soon from the police on this very issue but I am not worried because my spirit tells me I did the right thing. As at the time that the Major was killed, a police officer by name Robert Ackah had also been shot dead earlier in line of duty but it was being treated silently until I spoke very loud on it. How should we the members of the police service particularly the junior ranks lay down our lives for this country and still be treated like pieces of rag or outcasts? Mr . Speaker how and why? Mr. Speaker I hope you understand my frustrations, anger and pains? How I wish you can be in our shoes for just a day to understand our struggles and sacrifices to make Ghana safe from crimes yet we are being discriminated against and treated unfairly by even parliament?

Mr. Speaker I will like to end here. Thanks to you and a whole 270 members of parliament to have selectively passed a law to suit one and leave the rest of us to our fate and that is exactly what happens in animal farm as I mentioned earlier. It's sad how everything has been bagged to one person and left the rest of us to our fate. It is not worth dying for Ghana and that is strong signals that parliament is sending to us. I will personally consider it and heed to it.

Mr. Speaker, today is Monday and I will have to go for service enquiry to defend my charges of writing an open letter to the president on 8th June 2017. I hope this one also bring more charges. What an animal farm we have found ourselves in? It's sad butI am still asking so everything for Major Mahama's wife and children alone ? What about us? I mean we the "sankwas?