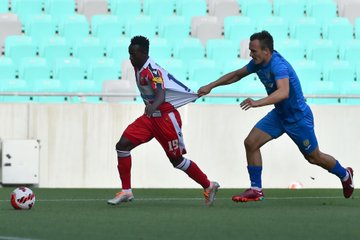 Ghanaian winger Osman Bukari made his debut for his new side Red Star Belgrade (Crvenz Zvezda).

The 23 year old joined the Serbian side recently from Belgian side KAA Gent and the ninth Ghanaian to play for them.

His side Red Star Belgrade played out a 1-1 draw with Slovenia side NK Domzale in a preseason friendly  in Ljubljana.

Osman Bukari was given some time off the bench as he made his debut for his new side.

The Ghanaian who was delighted with his debut posted it on his twitter handle.

"Happy to have played my first game with crvenazvezda. Loved the fighting spirit from the boys".