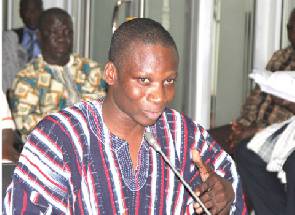 Parliament on Friday stepped down a motion for the approval of the nomination of the deputy minister-designate for Local Government and Rural Development, Mr John Oti Bless.

That was because of the insufficient number of Members of Parliament (MPs) to debate and approve the motion.

The Majority Leader and Chairman of the Business Committee of Parliament, Mr Alban Bagbin, indicated that the motion for the approval of the nomination of Mr Bless had been appearing in the order paper for some time, and it was appropriate it was taken today (Friday).

Per the order paper, the Chairman of the Appointments Committee, Mr Ebo Barton-Odro, was supposed to move the motion for the House to adopt the committee's report.

But the Deputy Minority Chief Whip, Mr Ignatius Baffour Awuah, said Parliament did not have the sufficient number to consider the motion.

Mr Bagbin explained that he raised the issue of the motion for the approval of Mr Bless at the last joint caucus meeting.

He said he got the sense from the members that they did not have any difficulty with the motion.

But Mr Bagbin agreed to the call by Mr Baffour Awuah for the motion to be stepped down.

Mr Bless, a Member of Parliament (MP) for Nkwanta North, was nominated together with a former Executive Director of the West Africa Peace Building Network (WANEP), Mr Emmanuel Bombande, as a Deputy Minister for Foreign Affairs and Regional Integration, and a former District Chief Executive of Upper Manya, Mr Joseph Agmor Tetteh as a Deputy Ministers for the Eastern Region.

They were vetted by the Appointments Committee of Parliament, which recommended the approval of all of them.

But a petitioner had asked the MPs to reject Mr Bless's nomination because of his alleged contempt comments he purportedly made against the Justices of the Supreme Court on Montie FM 'Pampaso' political programme.

Parliament subsequently approved the nomination of Mr Bombande and Mr Agmor Tetteh, but suspended the approval of Mr Bless.