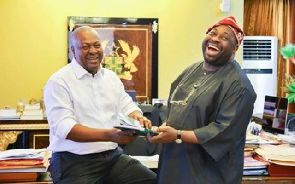 President John Dramani Mahama on Friday night launched a special edition of the Ovation International lifestyle magazine which features him and the works his government has been doing to transform Ghana.

President Mahama expressed appreciation for the works done by the Nigerian businessman and publisher of the magazine, Chief Dele Momodu to publicize his ‘transformation agenda.’

“…everyone who reads this magazine has a proper and correct insight into some of the work that we are doing, but most of all I hope that reading and looking at the pictures will be entertaining and fun to all the readers of Ovation Magazine,” President Mahama said and proceeded to lift a veil that covered some copies of the magazine to officially launch it in Accra.

The President also announced at the function that he had a cold as a result of the campaign stress.

As part of the long interview in the current edition of the celebrity magazine, President Mahama said there was a media cabal "blocking" and "distorting" his government’s good works and message of transformation.

This has generated public debate with some alleging that the publisher timeously featured President Mahama to project him especially as elections was only a few weeks away.

Also, Chief Dele Momodu, the publisher, prior to this publication had praised President Mahama in a radio personality profile interview with Bola Ray on Star FM, and so his critics have argued that he only tried to project his friend in his magazine.

Momodu, a Nigerian resident in Ghana has since explained that he only went out there to do a professional work and wondered why he was being branded partisan especially when the magazine had featured ex-presidents John Kufuor and Jerry Rawlings in the past.

Responding to the criticisms himself at the launch of the magazine, President Mahama said: “I follow Dele on his Twitter handle and I note the criticisms he comes under for speaking positively about myself or my government.”

“That is one of the developments in our politics that is most unpleasant, we can’t take criticism, we can’t take news that is positive about somebody we don’t like, and so we have a lot of insults on social media and actually distracts from the issues and instead of dealing mainly with the issues, people rather take the route of trading insults.”

He added: “But one of the things Dele has and I wish I develop more is that he has a very thick skin and he has a very calm manner of responding to criticism that is thrown at him. I have been following him and learning how to respond not the champion way, but I won’t wake up at 3am and tweet responding to any criticism, I can assure you, but yes I admire his calmness and the way he responds to criticisms,” President Mahama said.

Throwing light on how the interview was done for the publication, the President said it was done partly in his office at the Flagstaff House and partly at his home.

At home, the President said when his daughter, Farida, saw that he was doing make-up prior to the photo shoot and interview, she questioned it and said she thought it was only ladies who put on make-up.

In some of the pictures, the President is featured playing basketball.

“I had a little time to spend at home, myself and Farida and Jesse spend some time playing basketball and so that basket was based on quite some practice.”

The answer is: “she had travelled and so she was not in.”

The person again asked but what of the other kids? “The older boys are all away, university, and so they come [home] only during vacations. And so it was just me and

Farida and Jesse in the house. But Jesse was spending time with his friends and so he couldn’t be with us,” President Mahama explained.

“So definitely I’m sure that when I, eventually by the grace of God after 2021 do another Ovation with Dele, we’ll have more time to spend and probably do a more extensive cover than we have, but this is impressive and I would want to thank Dele and his team for the very wonderful work that they have done.”

President Mahama said pictures speak a thousand words and he believe that the pictorial coverage of his works especially by “a reputable magazine like Ovation, will speak many more words than many of us can speak even on the campaign trail.”

“And so I want to thank Dele and his team especially my friend the photographer, Dragon,” he said and elaborated some of his governments achievements since 2013 and proceeded to launch the magazine.

Early on, Friday morning, Chief Momodu in a radio interview with Accra-based Citi FM to throw light on the magazine launch said President John Mahama deserved praise from Ghanaians because he had done a “great job” for the country.

“People read politics into everything but frankly speaking, there is so much to celebrate about President Mahama,” he said.

“He has done a great job. I have travelled extensively across Africa and Ghana is working, Ghana is rising and it is our duty to celebrate Ghana.”

“I think President Mahama has done well and as a lifestyle magazine, ours is to cover the beauty of Ghana. It is a news magazine that you can accuse of being biased,” he said..