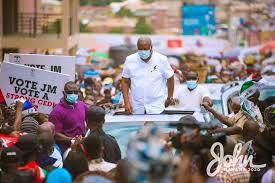 On this trip, you are either for Mahama or not for Mahama. There is no room for any hypocritical, serpentine double-tongued, double-standard, bed-bug-like attitude.

Check the pedigree of Mr. Mahama and know who you have believed in and have decided to follow. Don't be like a dry leaf tossed about by the wind.

To follow President Mahama, you must have these characteristics: Be solid and stable like a rock; be straight like a bamboo; be unchangeable no matter the season like the leaves of a pine tree.

Mr. John Mahama was a Deputy Minister and Minister of Communication (and Cabinet Minister) under President Rawlings.

Mr. Mahama was the Director of Communication of the NDC in Opposition, who caressed many in the media during the difficult days of the Kufuor regime, to be sympathetic to the aspirations of the NDC.

He drew the media closer to the NDC and its leadership. by organising the first ever Press encounter with President Rawlings and NDC leadership at the Ridge office of the late former President.

(For the records, Egbert Faibille, Alfred Ogbarmey and Owula Mangortey, in this order, were the first bold
Media persons to get the nod of the moderator Mr Mahama to fire questions at President Rawlings).

Mr. Mahama was for many years an MP for Bole- Bamboi.

Mr. Mahama was on the ballot for four epochal presidential elections (once as a Running Mate, and thrice as a Flagbearer).

Apart from Chairman Rawlings, how many people in the NDC, from the foundational 31st December, 1981 revolutionary years till date, have operated at the highest level of national politics like Mr. John Mahama?

That he has his own style, and endeavours to be MR. NICE at all times, does not give so-called lovers, friends, comrades, hypocritical- double- standard- followers the right to go stand on a refuse dump to cast innuendos and aspersions with an aim to bring Mr. Mahama's name, image, integrity, achievements so low in the eyes of right thinking members of society.

Learn from those of us who had the previledge to follow and serve Chairman Rawlings and President Prof. MIlls. Even though sometimes we welcomed divergent views, we did not always countenance nor tolerate insults and attacks on our leaders.

I repeat: Show your love and loyalty for President John Dramani Mahama by making it too expensive for any one to insult and attack him.