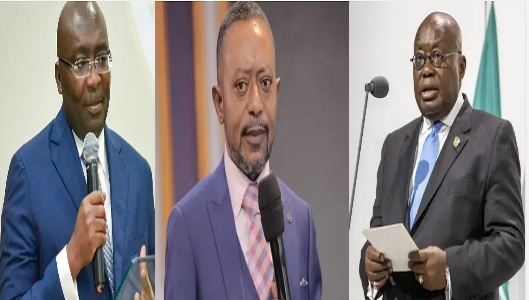 His problem with the two identities started when he (Owusu-Bempah) got into a public argument with Nana Agradaa, a priestess turned evangelist, leading to his detention in police custody last year.

Owusu-Bempah bemoaned the different roles that President Akufo-Addo and Vice President Bawumia played in his plight, from his arrest through his imprisonment and processing for court, in his sermon a few days ago.

In front of a large crowd, he declared that, in principle, he had no issues with any political party, whether it be the ruling New Patriotic Party (NPP) or the opposition National Democratic Congress (NDC).

He emphasized that he had difficulties with the President, his vice president, and several NPP members. As for me, I'm upset with Akufo-Addo because his order to have me restrained in handcuffs to a bed shocked me.

In order to illustrate his case, Rev. Owusu Bempah recalled the series of events that had taken place: "People came to my premises and fired bullets, my pastors were detained, and I was investigating why I had been arrested. Why was I detained when I hadn't physically harmed anyone? I was stunned.

"I was sent to Police hospital and while a drip was on me on a bed, I was chained to the bed in the name of order from above," he added, describing how he got medical symptoms while in the cells. He claimed that Dampare was engaging in such behaviour and that Akufo-Addo and Bawumia were aware of it.

Even though he has animosity toward both guys, Owusu-Bempah asserted that they called to wish him a happy birthday.

"Subsequently, you phone to wish me a happy birthday. You already know... Despite the fact that I was the one who was subjected to abuse and was tossed before the court, you allowed me to be jailed despite your failure to keep all of your commitments.

I'll speak up someday, I promise. How I suffered as a result of Nana Akufo-Addo: I took my life into my own hands; every time I move, guys in cars and with guns pursued me. As soon as you got what you wanted as president, you beat me. I should be humiliated?" he questioned.