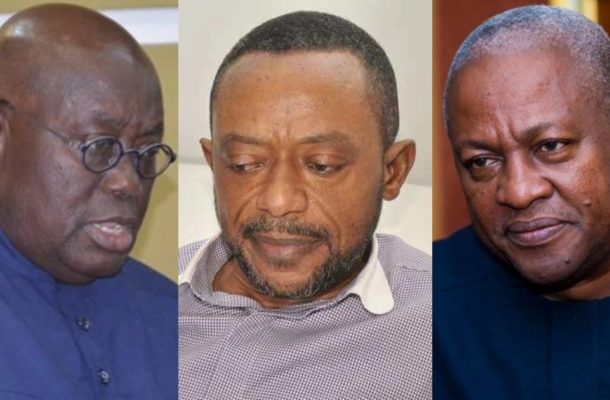 Founder and leader of the Glorious Word Power Ministry International (GWPMI), Reverend Isaac Owusu Bempah has responded to reports that he has ditched President Nana Akufo-Addo for former President John Mahama in the 2020 elections.

The reports follow a leaked conversation between him and and NDC serial caller and staunch Mahama supporter, Appiah Stadium, which has been making rounds.

In the audio recording  on Peace FM's prime time news on Thursday, Owusu Bempah is heard suggesting to Appiah Stadium a win for former President John Mahama in the 2020 elections.

Being close to president Nana Akufo-Addo and his NPP, Owusu Bempah's turnabout in the leaked audio has come as a surprise to many people.

Moreover, Owusu Bempah has on countless occasions stated that Mahama will never come as president again.

But reacting to the emergence of the tape, Owusu Bempah who admitted to speaking to Appiah Stadium on phone stated that the audio making rounds was not painting the exact picture of their conversation.

According to him, though he spoke on a number of issues with Appiah Stadium, he did not exactly say Mahama was going to come back to power but it was rather Appiah Stadium who suggested that he will tell the former president that he (Owusu Bempah) had predicted victory for him (Mahama).

Owusu Bempah explained that he did not object to Appiah Stadium's suggestion because it was something Appiah had been saying for a long and he thus saw it as no big deal.

Speaking on Peace FM, Owusu Bempah suspected that the tape was the handiwork of his detractors who have cut and pieced together parts of his speech todiscredit him.

He insisted that his earlier prediction that Mahama will not become president of Ghana again still holds and that he was not saying that out of hate for the former president.