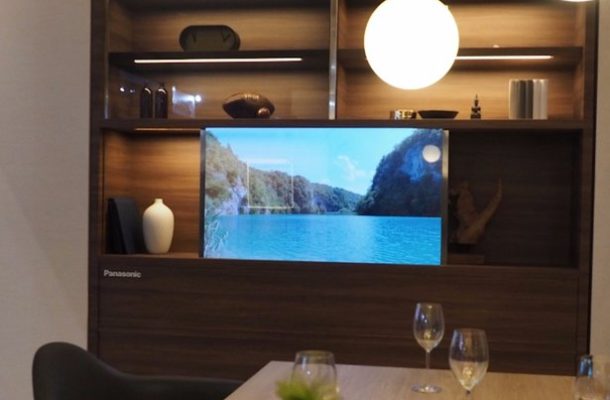 A new invention from tech giant Panasonic turns a standard TV screen into a transparent pane of glass at the flick of a switch.

The sci-fi style gogglebox was first revealed at the gigantic Consumer Electronics Show in January but has since been refined and updated.

Panasonic says it has swapped out the LED screen for a new OLED display that doesn't need a backlight to give it a picture.

Just to show off how impressive it was, the Japanese company embedded the screen into the front of a cabinet.

It looks like an ordinary sheet of glass until it's turned on and the high definition picture shimmers into view.

According to tech site Engadget , the reason for changing the display was that Panasonic wasn't happy with the transparency of the previous screen.

"The OLED screen is made from a fine mesh, embedded into the glass sliding door," explained Engadget.

"While the TV image is visible even with the backlighting on, once it's dimmed the image is clear and bright enough to be almost indistinguishable from existing televisions."

Panasonic isn't the only tech company that's experimenting with a futuristic telly.

LG has a TV screen that's able to roll up like a newspaper - check out the video below to see it in action.

So - forget 4K and VR, looks like we'll soon be watching Strictly on tellys that fold up or disappear completely.