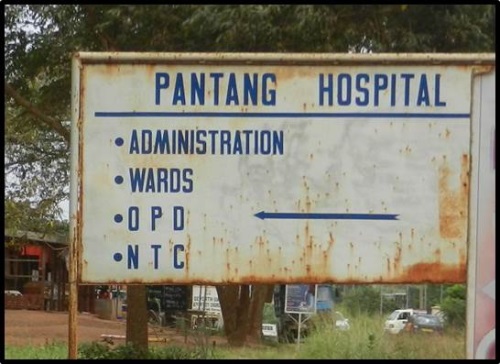 The Nii Afutu Brempong family of La has cautioned the Director of the Pantang Hospital Dr. Frank Baning, to stop marking peoples’ walls and buildings with an order to remove their structures since the Hospital has no land in areas he had extended his adventures to.

It would be recalled that staff of the Pantang Hospital have staged a demonstration over encroachment on “their lands.”

According to the family, it decided to wait whilst steps are taken to address the issue of encroachment on the said hospital land.

Addressing a press conference in Accra, the Pantang Chief, Nii Kotei Afutu Brempong II noted that the Director of the Pantang Hospital Dr. Frank Baning, on his own will and who was believed to be working in the interest of some top political figures, was moving from one building to the other, writing notices on peoples’ properties ordering them to remove their properties on the Hospital Lands; when indeed, those buildings do not fall within the land government acquired for the hospital.

“The land Dr. Frank Baning is claiming to be Pantagn Hospital lands do not belong to the Hospital. Dr. Frank Baning has no right in his personal capacity to be writing on peoples’ walls ordering them to remove their structures,” he stated.

According to Nii Kotei Afutu Brempong II, residents on the land and Private Estate Developers whose buildings Dr. Frank Baning marked for his so-called demolition have legally acquired their land from the Afutu Brempong Family.

He said: “Dr. Frank Baning had no audacity to even give an ultimatum, thus 12/7/2021 for people who have legally acquired their lands from the family to remove their structures.  To this end, the Afutu Brempong Family can no longer wait for Dr. Frank Baning who is doing the bidding of his paymasters to continue to attack residents on their lands after acquiring them legally from the Family.”

He noted that the Family is duly aware that Dr. Frank Baning who has assumed the contract of a land guard, has been contracted by some top government officials to embark on that adventure against the Afutu Brempong Family.

“Instead of him, allowing government and stakeholders to take steps to address the issue of encroachment on their premises, he decided to turn himself into a land guard, threatening to demolish peoples’ properties by July 12.”

He stressed that “Nobody and we stress on that, NOBODY had acquired the land illegally and for Dr. Frank Baning to accuse the Municipal Chief Executive of giving permission to people to put up buildings and structures on the land is neither here nor there because, neither Dr. Frank Baning nor the Hospital owns any land there.”

The Pantang Chief also averred that they found it interesting that Dr. Frank Baning will leave his duty as Director and Doctor of a Hospital and assumed the capacity as Chief land guard for his paymasters by showing much interest in the land belonging to a family but not the hospital, and leave his responsibility to serve and save the lives of mankind, for which he had sworn an oath.

“He now decided to fight for lands which he had no institutional knowledge about…In any case, is Dr. Frank Baning aware that government is yet to pay the Afutu Brempong Family full compensation for the lands it acquired for the establishment of the Pantang Mental Hospital and the National Orthopaedic Centre? If he is not aware, then this is the right opportunity for him to get himself educated.”

Nii Kotei Afutu Brempong II maintained that the family has been engaging the government in many fora for compensation to be paid and also release the vacant land outside the acquisition to the family for their use and that a judgment of an Accra High Court on 30 March 2011 delivered by her Ladyship Justice Mrs. Elizabeth Ankuma, held that the Pantang Hospital had encroached a portion of the land belonging to the family.

“This clearly shows that the hospital does not own all the parcel of land around it as being claimed by Dr. Frank Baning, neither does it have ownership over every available stretch of land in and around the hospital.  It will be in Dr. Frank Baning’s own interest to stay away from the path he has chosen and concentrate on his managerial duties at the Hospital,” he warned.