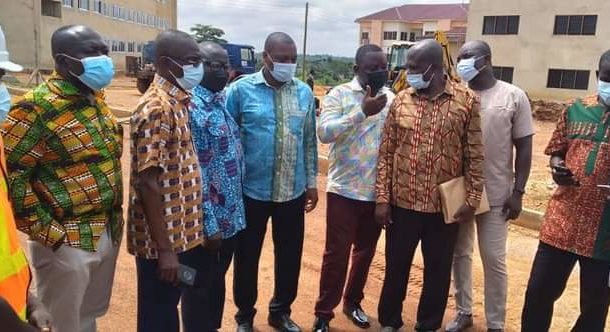 The Parliamentary Select Committee on Education has paid a working visit to the Abomoso Model Senior High School in the Atiwa West District of the Eastern Region to ascertain the progress of work on the project.

The school which is about 90% complete is one of the nine new model schools being constructed by the government through GETfund in some parts of the county.

The Committee, led by the Chairman, Kwabena Amankwa Asiamah, and the Ranking Member, Peter Nortsu-Kotoe, expressed their satisfaction about the project but noted that it must be replicated in all the 16 Regions of the country.

This according to the MPs will boost the brilliant intention of making second-cycle schools more affordable and accessible in the country.

Seven out of the nine schools being constructed across the country are proposed science-focused schools while the other two are first-ever Creative Arts schools located at kwadaso a suburb in Kumasi and a Senior High Technical School at Dabaa named after former President John Agyekum Kuffuor.