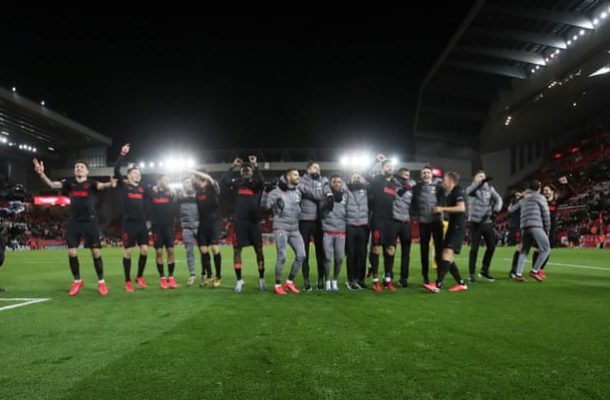 Ghana's Thomas Teye Partey put in a splendid performance as his dogged Athletico Madrid side brushed off the resistance of Champions League holders Liverpool at their own backyard at Anfield on Wednesday night.

The Rojiblancos were holding a slender one nil lead as they faced Liverpool in the Champions League second leg round of 16 clash.

The reds took the lead for the first time in the game on the stroke of half time in the 43rd minute when Georginio Wijnaldum headed home to give the home side hope of overturning the scores.

Roberto Firmino's first goal at Anfield this season at the start of the added 30 minutes gave Liverpool the the lead in the tie.

It was soon the turn of the away side as Adrian deputising for the injured Alisson showed the mistakes in him as a dreadful clearance gave substitute Marcos Llorente the chance to pounce on a loose ball and calmly slot home with a low finish to secure Atletico's crucial away goal.

Llorente struck again with another composed finish in the 105th minute and with the spirit draining out of Liverpool and their supporters, former Chelsea striker Alvaro Morata adding insult to injury with a third in the dying seconds to send Atletico through to the last eight.

The Ghanaian midfielder did not start too well but grew into the game and put up an inspired performance to help his side progress to the quarter finals of the Champions League.