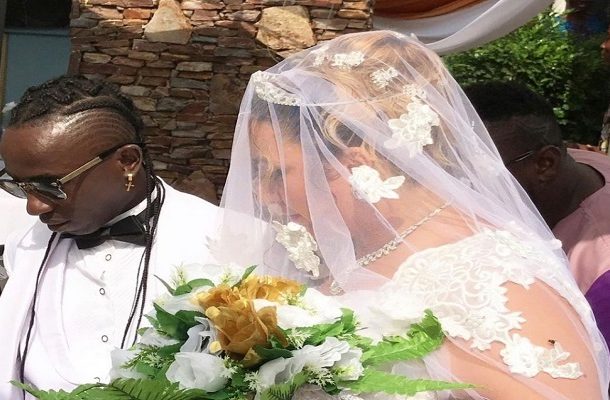 The first Ghanaian celebrity to walk the aisle in 2021 is ‘One Corner’ hitmaker, Justice Amoah, known in showbiz as Patapaa.

The singer married his German girlfriend Liha Miller in his hometown Agona Swedru in the Central Region on January 2.

It all started with a traditional wedding that happened in the artiste’s home in Agona Swedru in the Central Region before later continuing with a white wedding at Cedi Lounge and Kitchen.

However, barely a day after the event, a video of the hiplife act giving a BOMBSHELL reason for marrying a white woman has surfaced on online.

In the viral video, a TV presenter is seen grilling Patapaa on his decision to settle down with a white woman when there are beautiful Ghanaian ladies in his native land.

But in response, the singer, with his groom standing beside him, gave a sensational reason that has since triggered widespread attention and excitement on social media.

Patapaa said all private parts of women are the same. To him, nothing makes any difference whether the lady is white or black.

"I want to find out from you why you settled on white women when there're beautiful, fair, black and attractively curved ladies in Ghana," the journalist questioned.

The "One Corner" hitmaker startlingly replied, "All private parts of women are the same."

Watch him in the video below:

Boat 3 months ago
The interviewer in indeed very stupid for asking such racist question. He needs to retract the question and apologize to Patapaa's wife? Honestly, it is only Ghana journalists can think of asking such disgraceful question.