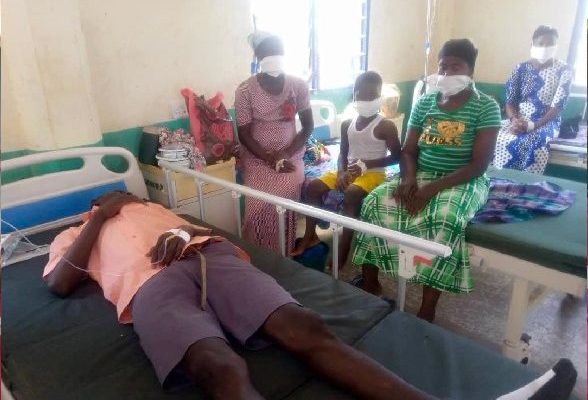 Residents of Janga in the West mamprusi municipality of the North East region have been compelled to share beds at the Janga Polyclinic in order to get access to quality health care. 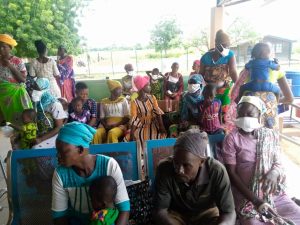 A visit by DGN Online to the Janga polytechnic revealed that patients numbering 2-3 were sharing the same bed while others were treated on benches and the bare floor due to the lack of beds at the facility.

Even though the facility made provision for male and female wards, the continuous increasing in patients attendance has caused massive congestion at the facility.

The health facility currently lacks infrastructure and beds which has forced the facility to admit male and female patients in the same ward for treatment which is affecting quality health care delivery.

The Janga Polyclinic currently has about 15 beds which takes care of over 21,000 residents and has not seen any form of renovation since it was handed over nearly 10 years ago.

Some patients at the facility told DGN Online that they fear that they might contract some diseases while sharing beds with other people.

“ We know that it is not good to share the same bed with others especially when we are all sick because we can be infected but what can we do we need treatment .”

According to them, they do not have any other choice than to rely on the polyclinic because the only option for them is to travel to Walewale or Tamale to get access to health care.

The Sustainable Development Goal 3 which Ghana is a signatory, talks about ensuring healthy lives and the promotion of well-being at all ages.

Alhaji Zakaria Iddi, a youth leader in the Janga community told DGN Online that the Janga polyclinic needs expansion to create space for more beds and other health equipment.

“If you go into the wards, you see children and adults sharing the same beds which is very unacceptable because any of them can be infected with a different disease from the other because they are all lying together on the same bed.”

He lamented that a ward which is meant for 4 patients is being occupied by almost 10 patients which is dangerous.

Alhaji Iddi stated that a fundraising exercise was organized by the Janga Polyclinic and the community to raise funds to start a project to help expand the polyclinic to ease congestion at the facility.

He however said the building project has since been halted due to the lack of funds to complete it.

He hinted that most of the health workers at the facility are seeking to leave because they are working under conditions that is not conducive for them.

“ I am appealing on behalf of the Janga community to the outside world, government, individuals, NGOs, and anybody who can help to come to our aid to expand our polytechnic and provide us with beds for quality health delivery.”

The Paramount Chief of Janga, Naa Seidu Nantogmah, expressed worry about the poor state of the Janga polytechnic and called for immediate attention.

“ I haven’t slept for sometime now due to the conditions at the facility , they put 2-3 people on a single bed on admission and as you know if you don’t voice out your problems you might not get anyone to help you so I am appealing to government , NGOs and philanthropist to come to our aid to expand facility to enhance health delivery in my area.”

Meanwhile authorities at the Janga polytechnic declined to comment on the matter when contacted by DGN Online.