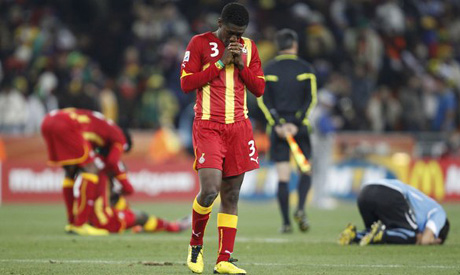 Penalty kicks; to many footballing nations, is an aspect of the game that evokes fond memories. Italians do remember very well Fabio Grosso netting the decisive spot kick to win them the 2006 FIFA world cup. That was to break a jinx of losing three times consecutively in the competition (1990, 1994, 1998)

Here in Africa, there are other tales to tell as well. From Egypt, to Cameroon to Ivory Coast among others, various countries have recorded success during shootouts more times than they have lost. For Ghana, this looks a slightly different story. Our pains surpass our gains when the subject of penalty shootout is raised and certainly very few memories of glory moments exist.

What has triggered this writeup is the latest in a series of failures after Ghana’s U-23 side, the Black Meteors were outdone by Ivory Coast in a semi final of a tournament that will also serve as a qualifier for the 2020 Olympic Games football event.

According to many there seems to be a curse which needs breaking in order for Ghana to see joy mostly on such occassions.

As to where this curse, originates from, I cannot really tell, but further probe into the matter reveals that perhaps we are the architects of our own destiny in this context and definitely there is no other cause.

I have taken time to elaborate on certain issues I feel need to be brought to our attention if we are to make headway in our attempts to pull the plugs on our failures at penalty shootouts.

I call them, my penalty kick dynamics and though I have explained them below, I will take time to bring out a more comprehensive article on these dynamics in another article.

One needs to brave up to take the bold step of walking to the spot to effect the kick. Several things happening between that short period where a player takes that walk to the spot have the tendency to bug him up. More reason, players should be worked on psychologically to prepare for such a moment. For instance Ghana has a poor record in regards penalty shootouts. This age-long situation needs no ‘Houdini’ approach to overcome. We need to consciously flush out the existing mentality and inject one that exudes positivity. It is sad to note that our attitude towards inculcating the use of pshychology to get the best out of our footballers is very unencouraging and the sooner we tackle such matters with some verve, the better it is for all of us.

Football has evolved to become more scientific most recently. There have been researches conducted to study David Beckham’s technique used in taking freekicks. Books were even written to this effect. There are several instances to cite regarding the approach by some connoisseurs of the game to make glare how scientific football has become. Its however sad to note that our approach as a country towards fusing science with football to solve most of the issues that cripple our fortunes in tournaments has been very lackadaisical. Till date we still debate what actually penalty kicks are about and have blamed Lady luck for barely smiling down on us in such moments. Per my checks, Ghana’s shootout wins in the last 3 decades isn’t even up to 5 and that certainly cannot be just about being unlucky.

There is a technique to employ in penalty kicks. How a player even makes a move to take the kick needs some but of meticulousness.

Although we are humans and cannot always be perfect, the act of identifying a technique and constantly putting it to practise would improve drastically one’s chances of getting it right.

Jorginho’s trademark move before taking a spot kick certainly isn’t about luck. Its about calculating and.effectively using his technique to outwit the opponent goalkeeper. Sergio Ramos, Ruud van Nistelrooy, Mikael Ballack and that exclusive list of expert penalty kick takers certainly aren’t the luckiest footballers to have emerged. They identified a technique, consistently worked on it and improved their penalty taking skills.

When the Ghanaian footballer grows up thinking penalties are all about luck and does very little to work on his know-how revolving around it, he will continue to fall behind those who appreciate how scientific this aspect of the game is and work assiduously to be better at it.

3) Luck:
The Roman Philosopher Seneca the Younger defined luck as ‘what happens when effective preparation meets an opportunity’. I couldn’t have agreed more. Growing up, we have often trusted the divinities to come to our aid and just like in the fairy tales have a happy ending even when in certain cases we don’t deserve. Not to attack the religious folks, but being overly indulgent in matters of religion has been our bane. We have always wanted God’s help even when we’ve not done much to merit it. Christians have abused and preached wrongly the topic of grace that most of them have become lazy and despite not doing things right believe that some moment of prayer will turn around their fortunes.

Alas, this has crept into our game. It has led officialdom to give little attention to effective preparation and has resulted in teams resorting to spiritual forces to invoke luck on their behalf.

Such practise is very common in our side of the world and its disheartening and basically unproductive. I am not in any way trying to debunk the theory that spiritism has a role to play in the game, but I am speaking against the tendency of overemphasizing its effect to the extent that attention is not given to planning and preparation.

We make our own luck. Certainly Seneca couldn’t have said it any better. We are mostly not lucky because even when the opportunity rears its head, our ill preparations lead us not to be able to capitalise on it and we miss out.

Even the Christian’s Bible speaks of ‘one can only reap what he has sown’. If Ghana wants to break that penalty shootout jinx, we certainly need to change the conversation and start getting serious about solving it just as other footballing nations have and continue to do.

No country was made for penalty shootout; another day, we shall dive deeper into this subject.