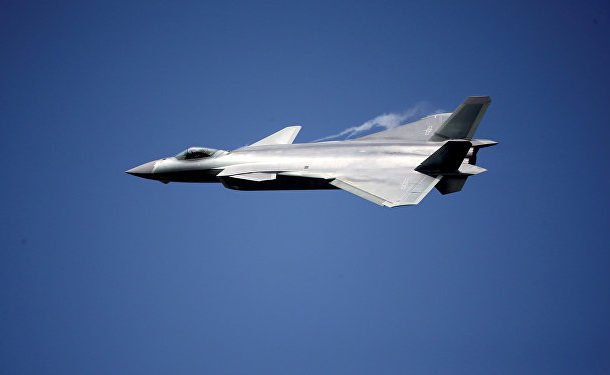 The Chinese People's Liberation Army Air Force (PLAAF) remains "the largest aviation forces in the region" and the third biggest in the world, the Pentagon revealed in a recently released report on China's military power.

"The PLAAF is rapidly catching up to Western air forces across a broad range of capabilities and competencies", the report claimed, referring to the Chinese Air Force's "2,500 total aircraft and approximately 2,000" combat planes.

In this vein, the survey also singled out China's alleged efforts to expand its military influence across East Asia and the globe with the help of its navy, which the report said is now "the largest in the world, with an overall battle force of approximately 350 ships and submarines including over 130 major surface combatants".

The report described the People's Liberation Army (PLA) as the world's largest standing ground force, which "continued to transition into a modern, mobile, and lethal ground force" last year.

According to the document, 2019 saw the PLA "fielding upgraded combat systems and communications equipment and enhancing its ability to conduct and manage complex combined-arms and joint operations".

Referring to the Pentagon's 2020 China Military Power report, Kris Osborn, defence editor at the magazine The National Interest, noted in an article published by Fox News on Sunday that the US is not only concerned about the size of the PLAAF but "the increasing technical sophistication and multi-mission tactics with which it operates".
He recalled that "as part of its discussion of Chinese airpower", the report mentioned the Chinese military operating sophisticated Russian-built S-400 air defence systems. Chinese President Urges PLAAF to Strengthen Drone Warfare Capacity The comments came after Chinese President Xi Jinping stressed the importance of developing unmanned aerial vehicles as part of the PLAAF which he said "already has advanced aircraft and air defence weapons".

"Drones are profoundly changing war scenarios. It is necessary to strengthen drone combat research, education, and training, and accelerate the training of drone pilots and commanders", Xi told students at the PLA Air Force Aviation University in Changchun, Jilin Province.

American Media Explains What May Help China's J-20 Warplane Dominate US F-35
This followed the US Defence Intelligence Agency releasing its annual report on Chinese military power in 2019, revealing that the PLAAF "is developing new medium- and long-range stealth bombers" capable of striking "regional and global targets".
The document added that Beijing's continued efforts to modernise its navy were "closing the gap with Western air forces across a broad spectrum of capabilities, such as aircraft performance, […]  and electronic warfare".