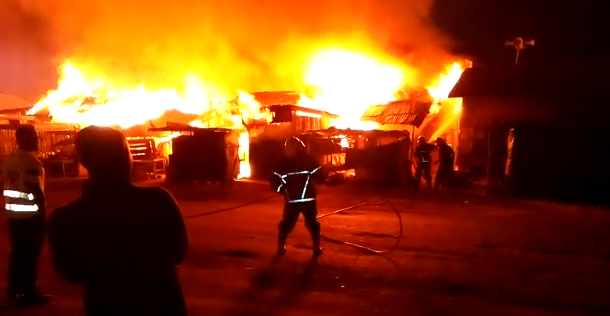 A fire which engulfed parts of the Abuakwa-Dadiase market in the Atwima Nwabiagya District of the Ashanti Region has led to the loss of millions of properties.

The fire which reportedly destroyed over 70 shops started from a shop with fire crackers and spread to other shops destroying items worth millions of Ghana cedis.

Speaking to the media, Kelvin Akyereko, the assembly man of the area applauded the professionalism and the swift intervention of the firefighters in salvaging the situation.

Personnel from the Fire Service said the cause of the fire is yet to be established however, it will be known after investigations are done.

Some affected traders disclosed that all the goods including their capital have been destroyed by the fire.

Below are some photos;