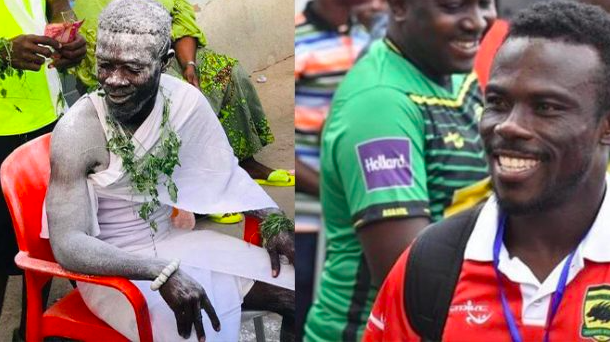 Former Asante Kotoko defender Augustine Sefah has vehemently denied that he has been installed as a chief  fetish priest of his hometown.

Pictures of a man cladded in a white cloth with striking resemblance to the former Kotoko defender is making rounds on various social media platforms on Thursday.

Many have attributed the said man in the picture circulating on various platforms with whitish substance that looks like powder all over his body to Augustine Sefah.

The player in an interview with Ghanasportspage.com, has revealed that he is not the one in the picture circulating and was even made aware of the circulating picture by some former teammates.

“I know nothing about it, it’s my own teammate Martin Antwi who made those pictures to be circulating, I don’t even know the person”, Sefa told ghanasportspage.com. “It’s not me, I don’t even know the person and I don’t know how the thing kept circulating like that. One of my former teammates at Medeama also uploaded it on his Facebook page the thing is circulating on his page; I don’t know anything about it”, Sefa insisted.

The player disclosed that even he was taken aback at first glance as the said person is his doppelganger and had to watch the image carefully before he realized that's not him.

“Even myself the very first time I saw the picture I was contemplating where I might have gone to do such a thing, but when I zoom the picture before I realized it’s not me.

The former Kotoko defender has blamed Kofi Owusu of Berekum Chelsea for spreading the said images as he uploaded them to his WhatsApp Status.

“Marting Antwi sent it first to me on WhatsApp and Kofi Owusu used it for his status then people started circulating it on Facebook. People started congratulating me for becoming a chief priest or whatever, but I don’t know anything about what is going”.

The right full back is currently unattached after leaving Kotoko upon the expiry of his contract before the 2020/2021 Ghana Premier League season.