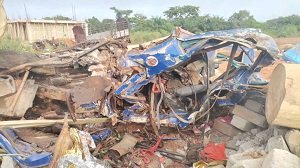 An accident on Tuesday evening claimed the lives of four persons and nine cattle at Kwanwoma Afrancho near trede in the Atwima Kwanwoma District of the Ashanti Region.

Two persons are in serious condition and are currently receiving treatment at the Komfo Anokye Teaching Hospital(KATH) while three cattle are missing.

It involved a timber truck loaded with logs and a cargo car which had cattle in them.

The timber truck was said to be carrying about eight pieces of timber log on its trailer while the cargo truck was transporting cattle to Obuasi.

The driver of the vehicle containing the cattle and his driver's mate all perished together with two other persons in the timber truck.

According to an eye witness, the driver of the timber truck was on top speed overtaking but was cautioned by onlookers but he did not heed till he slammed into the vehicle carrying the cattle killing all occupants of the two vehicles instantly.

The two vehicles were badly mangled as onlookers tried to rescue the persons trapped in the accident cars as officials of the Ghana Police Service and Ghana National Fire Service came to the scene to rescue the two persons who were alive.

They had to cut through the mangled vehicles before they were able to bring out the bodies of the deceased.

The bodies of the deceased have been deposited at the KATH morgue. 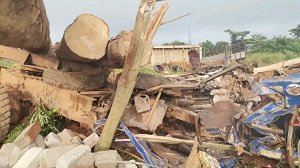 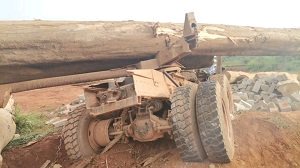 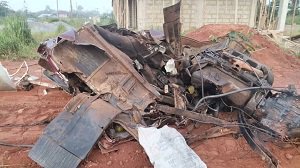