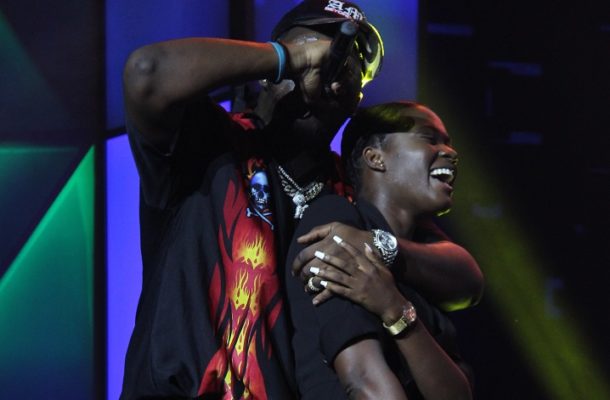 Celebrity love birds, Medikal and Fella Makafui have shot down claims their relationship is in trouble with a loved up performance at this year's edition of Ghana Meets Naija.

The show which came off at the Accra International Conference Centre on Saturday, June 8 saw the endowed actress join her partner on stage as he performed Ayekoo - a song he dedicated to her.

Fella put up some impressive dance moves with her beau and when it all ended, Medikal couldn't keep his hands off his woman, lifting her up and embracing her.

The audience ate it all up and cheered the couple on as they did their own thing on stage.

Medikal and Fella Makafui's relationship was made public last year after the rapper broke up with his ex, singer, Sister Derby.

The two have been constantly showing off their love on social media but lately rumours have been rife that all was not well and that they might have already gone their separate ways.

Some bloggers even hinted that Fella Makafui was suffering in silence as Medikal was treating her badly.

While they did not publicly address those rumours, their show at Ghana Meets Naija must have definitely silenced their haters.

See the pictures below:

Fella Makafui was all excited as she danced with her man

Fella's dancing was on point

The couple could not hide their affection for each other