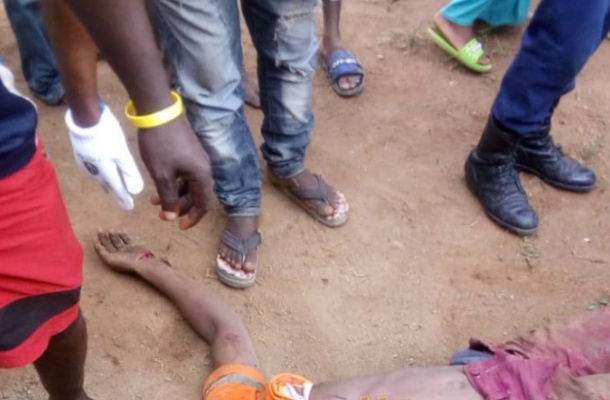 A 28-year-old okada rider, identified as Michael Bacha, has been killed by some unknown assailants at Gomoa Akotsi near Buduburam in the Central region.

Mr Bacha, who was set to wed his long time girlfriend somewhere around Easter this year, was robbed and stabbed to death.

The unfortunate incident is said to have happened Wednesday morning on the Gomoa Akotsi and Akraman road in the Gomoa East District of the Central region.


Witnesses, who spoke to Adom News, said the killers, hiring the services of Mr Bacha requested that they be transported to Gomoa Akraman, but upon reaching a section of the road, they ambushed him, pulled him into a nearby bush and stabbed him multiple times.

The suspects after perpetuating the crime stole his daily savings along with his motorbike.


Wife-to-be of the deceased, Agnes Tawiah, unable to control her tears could not fathom why some people commit such heinous crimes.

She said the last time he spoke to her murdered husband-to-be was on Tuesday around 8:am.


“The last time I spoke to him was at 8:am, since then I have tried his line several times but to no avail, I was just informed of his demise this morning. We were going to get married just this Easter, how can people be this wicked?” she cried.

Meanwhile, the Gomoa Ojobi District Police command has begun investigations into the matter.