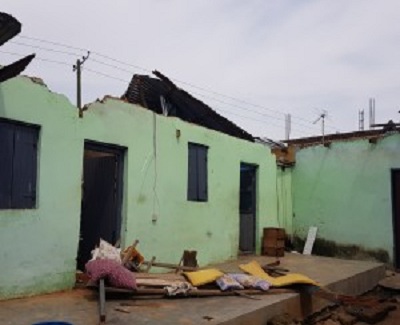 A severe storm that happened on Thursday has destroyed several properties worth thousands at Okorase in the Akropong Constituency of the Eastern Region.

Almost all public basic schools in the community had had part of their roofing ripped off.

Some uncompleted buildings had also collapsed with container shops of people flew from their location to different  locations.

At the time of the visit, some residents were seen trying to put some structure together or re-roofing their ripped off buildings to enable them to get places to lay their heads.

Some residents pleaded with the government and other philanthropists to come to their aid.

Ms. Akua Nimo, about 80years old woman told the Evening Mail stated that her entire building had collapsed and is currently perching at a family member’s house. She pleaded with philanthropist to come to her aid.

Food items were also not spurred by the angry storm as farm produce were brought down by the storm.

The National Disaster and Management Organisation has however visited the community and assured them of getting them some relief items.

The MP for Akropong constituency, Nana Ama Dokua, has also donated some roofing sheet to the Chief of Okorase to be used to re-roof the schools immediately for academic works to continue.