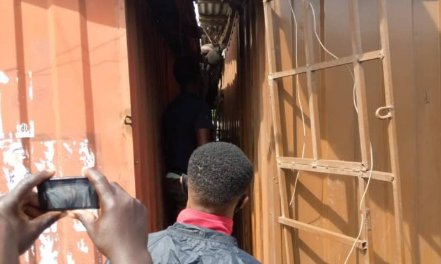 It was the end for a thief when a naked wire connecting two containers he was scaling through electrocuted the life out of him.

The shop owners, who operate at the Lapaz market, showed up for business as usual only to discover the lifeless body of the unidentified male hanging between their shops.

The deceased, who is believed to be in his late 20’s, is said to be an inhabitant, leaving neighbours to wonder why he chose to practice his thievery in the area.


A witness, who only gave his name as Samuel, explained the deceased was an errand boy of one of the shop owners, and came back after work hours to loot some items.
Meanwhile, the Assembly man for the area, together with one of the shop owners, who is a police officer, with great difficulty evacuated the dead body from the building.
The thief’s corpse has been transported to the Police Hospital morgue.