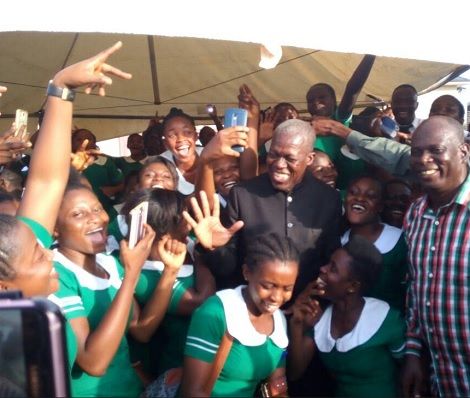 He made the remarks when he donated a 52 seater Mercedes Benz from the GETFUND to the Ntotrosu College of Nursing at Asutifi North in the Brong Ahafo Region.

He further stated that government values all forms of education, especially health and secondary education and for this reason, would continue to invest in those areas in order to support the development and progress of the county.

But this, he said would be realized when government is allowed to get another mandate to continue with it good works.

The Vice President used the occasion to laud the chiefs and people of the area for using it resources in investing in the education of the youth.


Mr. Amissah-Arthur said if you support yourself like what the people of Ntotrosu have done; government would partner and compliment their efforts through development drive.

On his part the Paramount Chief of the Ntotrosu Barima Twereku Ampem III thanked the NDC government for the numerous development projects that he has witnessed under his reign. He said the area has witnessed massive development from road infrastructure to water and health sector.

He described the NDC as a government that fulfills its pledges as he has witnessed in his area.

He said it was his wish and prayer that the NDC wins the upcoming elections in order to continue with it development agenda. He used the occasion to call for peaceful elections in the country.