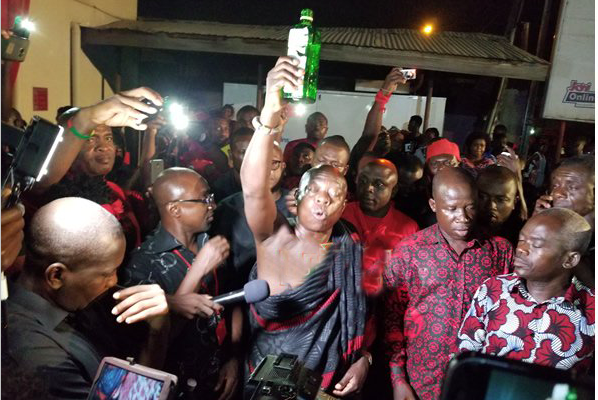 The mortal remains of  late staff of Asempa FM was welcomed  to the premises of his former work place with the pouring of libation.

The former host of Ekosii Sen, the late afternoon political talk show was  pronounced dead on arrival at the Korle Bu Teaching Hospital on Saturday November 18, 2017.

Uncommon of Kwadwo Asare Baffour Acheampong (KABA), he remained glued in black hearse from Transitions Funeral Home without stepping a foot at  the reception let alone walk to the studios of Asempa FM.

Former colleagues at the Multimedia Group were reduced to tears as they peeped through the windows of  the hearse to catch a glimpse of the lifeless body of the once affable broadcaster.

Many looked on in despair as another former colleague, Agya Brifah of Asempa FM led the  exercise to welcome the body of the late broadcaster home.