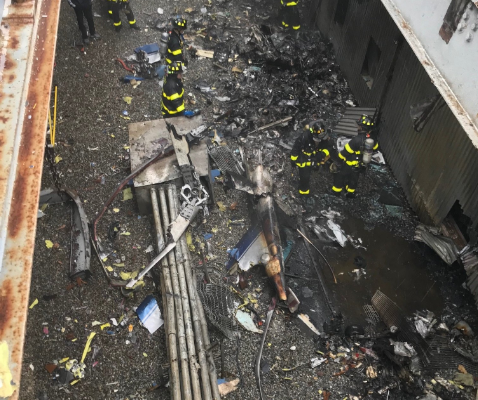 A helicopter crash-landed on the roof of a building in Manhattan, New York City officials said.

he New York Fire Department confirmed the pilot of the helicopter is dead. The pilot was only person aboard the helicopter, the FAA said.

The helicopter made a "hard landing" on the roof of 787 7th Ave., NYPD tweeted.

Based on interviews the NYPD conducted at the 34th Street heliport on Manhattan’s east side, the pilot was waiting out weather but for whatever reason decided it was OK to go.

The pilot then flew around Battery Park on the southern tip of Manhattan and up the west side of the island.

Somewhere between 40th and 49th streets, the pilot began to veer towards midtown Manhattan before the helicopter ultimately made the crash landing.

He said the White House is working closely with New York City and the state of New York.


"There will be a report in a little while as to what happened and why it happened," Trump said.

He noted the pilot of the helicopter had died.

Images from the scene of today’s helicopter crash at 787 7th Ave. in Manhattan. #FDNY members remain on scene. There is one fatality reported. pic.twitter.com/7qyyJWrMsw
— FDNY (@FDNY) June 10, 2019