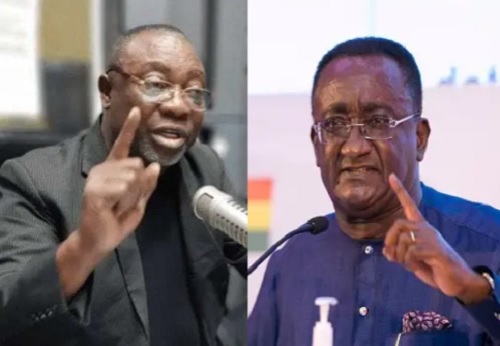 Minister of Food and Agriculture, Dr. Owusu Afriyie Akoto has described as “jokes” the comments made by NDC's Sam Pee Yalley on his presidential billboards.

His Excellency Sam Pee Yalley, a former Ghana’s former Ambassador to India, recently called for the removal of Dr. Akoto as Agric Minister, claiming the latter has been planting his presidential signboards instead of planting food.

Speaking on Citi TV’s Big Issues news analysis program, on the recent food inflation and the skyrocketing cost of food around the country, Ambassador Yalley accused Dr. Akoto of busily working on his personal interests rather than solving national problems.

“For freshness, fresh air in the face of investors, the President should immediately remove his Agric Minister. Why, because the man is not interested in solving the national problems. He is interested in his own presidency.

“Go round the country and see; instead of planting foods he is planting signboards for his presidency and I mean what I am saying.

“He is a big part of the problems because he is the one running Planting for Foods and even if ‘agblima’ is part of our food inflation, then we have a huge problem,” he said.

According to him in a TV3 exclusive interview on Thursday, August 11, 2022, he would never abandon his core duties only to go round the country planting billboards to advertise his presidential ambition.

“It's a joke! I, go and dig? I mean you should know better than this, you should! People are making jokes and you think they are serious, where I will go and put an axe in the ground and put a billboard for myself? They should be more serious than that,” he told Johnnie Hughes amidst laughter.

The host squeezed him a little further in an attempt to ascertain whether or not Dr. Akoto desires to be a president.

“But will you want to be president one day,” asked Johnnie Hughes.

He replied, “Of course, who doesn’t want to go to the highest level in their lives? I’m a politician and I have been a Member of Parliament, so why not? If the people who decide, decide that I should be the one. I will be too honoured.”