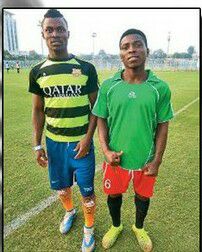 Two Ghanaian footballers are stranded in the Indian city of Kolkata after an agent duped and disappeared with their  $500 cash.

Richard Teyi Akumiha and Teti Philip Aadza arrived in the capital of Bengal for greener pastures, on the advice of an Indian agent by the name of Subrata, who took $500 dollars from them.

But the two youngsters, who arrived in India in November last year, were shocked to realise that they had been duped.

With the advice an assistance from an agent from an unnamed agent in Ghana, the two got to Kalkata with the dream of playing football for one of  the city's famous clubs, but the move looks far fetched as the agent dissappeared with their money.

Not a single Kolkata club has provided a trial opportunity to the Ghanaian pair, and have been left to roam the roads of Kolkata for the past two months,according to the indiatimes.com.

Player exodus is a major challenge affecting African players as they are being confronted with an inordinate taste to travel for bigger opportunities.

The two stranded boys now face a dire consequence of looming jail charges as their visa expires  in a matter of days.

Under India's Foreigners Act of 1946, people who stay in India illegally can face criminal prosecution. Those prosecuted under this law can not only face a fine and deportation, but they could be forced to spend up to five years in jail before being deported.

Stuck in such situation, Richard Teyi Akumiha and Teti Philip Aadza have started asking for money from Ghana. Realistic of the fact that their pleas are not a long-term solution, they want to request local football clubs to give them one opportunity to prove their worth.

Aadza, who has played for the Under-20 Ghana football team, pleads: "For once at least give me a chance. I would not disappoint you."