Police assault on woman regrettable; a blessing in disguise? 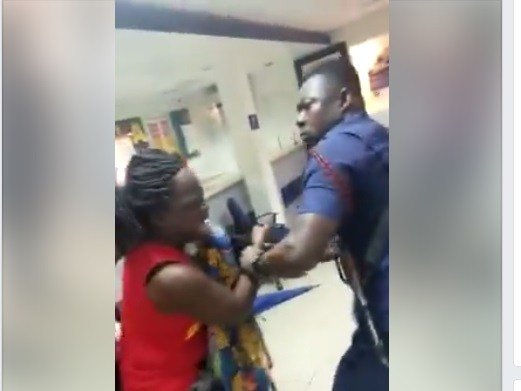 Many Ghanaians were outraged when the footage of a policeman assaulting a woman went viral on social media.

Ms Patience Osafo went to the Shiashie branch of Midland Savings and Loans Company to withdraw her savings when the unfortunate incident happened.

In an exclusive interview, the 36-year-old woman recounted that after four days of back and forth, she complained about her predicament but to no avail. As a result, she insisted on not leaving the banking hall without her money.

On that fateful day, she got to the banking hall around 7:30am and spent productive hours waiting due to unstable network. Subsequently, all the customers left the bank disgruntled, leaving her behind till 4:30pm. Is this not a clear indication of poor customer service?

As a single parent, the mother of three could not hide her frustration because there was nothing to feed on that evening. The saddest part is that the two-month old baby she was seen carrying in the video was starving, and she needed about GH¢25 for baby formula.

Apparently, the toddler was her grandchild. I was saddened when she recounted how her daughter who is epileptic was raped by an anonymous person few months ago.

In fact, anyone who has been in that condition before will understand her desperation. Besides, she didn’t go there to beg for alms, but to access her personal savings totaling GH¢270. Instead of the bankers to consider the poor woman, what did we see?

A policeman on duty, Lance Corporal Frederick Amanor, was brought into the picture to get the woman out of the banking hall. Regrettably, he was ostensibly seen in the emerged video hitting the lady repeatedly with an umbrella.

As if that was not enough, the stout cop unleashed his anger on the woman punching and slapping her ruthlessly, as the workers looked on aloof. The only intervention was when a man came in to rescue the baby from the attack.

But nobody saved the vulnerable woman from the violent officer who was wielding an AK47 rifle and a side arm. That was so dangerous because anything at all could have happened.

There is no denying that the police officer acted unprofessionally, to say the least. And it is not surprising that the video sparked public outrage and attracted widespread condemnation from all circles.

As a result, the Inspector-General of Police (IGP), Mr. David Apeatu, was quick to order the arrest of L/Cpl Amanor shortly after the video went viral. In fact, the Police Administration did the right thing by condemning the behavior of the policeman in a press release.

Many institutions including Parliament, Ministry of Interior, the Commission for Human Rights and Administrative Justice (CHRAJ), the Gender Ministry, human rights watch, and civil society organisations have all condemned the barbaric act.

Admittedly, the media deserves commendation for the relentless effort in seeking justice for the victim. I doff my hat to our friends in the media for acting as the mouthpiece of the vulnerable, especially Peace FM, UTV and the Daily Graphic.

The widespread condemnations indicate that Ghanaians have a common voice against social injustice, violence and lawlessness. In actual fact, rebuking such inhumane acts will go a long way to inculcate sanity in our society.

Shortly after narrating her ordeal to the media, Patience Osafo won a massive public sympathy. Subsequently, a number of spirited Ghanaians including those abroad were moved to donate hugely to turn her financial circumstances around.

The mother of three who used to sell sweets (toffees) at Shiashie lived from hand-to-mouth. Amazingly, dozens from all walks of life demonstrated love in kind and cash to support the welfare of the woman and her children.

For instance, Despite Group of Companies donated GH¢7,000; the women’s organizer of the ruling New Patriotic Party (NPP), Kate Gyamfua, presented GH¢5,000 and some assorted items to support Ms Osafo.

The Member of Parliament for Manhyia North, Collins Amankwah, also donated GH¢2,000 to the course of empowering the woman financially. It is worth mentioning that many more individuals supported in diverse ways.

There is a popular saying in Ga that “moko sane lɛ, moko sane ni”. To with that “a neighbour’s problem is your concern”. And this is exactly what most Ghanaians have demonstrated in the wake of the horrendous video.

So far, Despite Group of Companies has presented more than GH¢25,000 and various items received from the public to Patience Osafo to start a new life. God bless every hand that gave generously.

Paradoxically, the woman should be thanking her stars, while L/Cpl Amanor faces the law for his obnoxious action which has incidentally transformed the fortunes of the victim. Obviously, the policeman has bitten more than what he can chew.

It is timely that the management of Midland Savings and Loan Company promised to compensate the assaulted customer. Meanwhile, five workers of the company who witnessed the horrific assault have been suspended.

In recent times, the Ghana Police Service has come under heavy criticism, especially coming on the heels of the shooting of seven suspected armed robbers in Kumasi. But let’s not lose sight of the enormous sacrifice of the police over the years.

According to a report, at least 48 police officers lost their lives in line of duty in 4 years. It is startling to learn that 15 out of the 48 personnel were killed by suspected armed robbers.

The Police has, undoubtedly, performed creditably in combating crime, protecting lives, and maintaining law and order in our community. It’s good to expose misfits or bad elements in the system, but we should not run the Police institution down.

I hope our men in uniform will take a cue from this unfortunate development. “A word to the wise, is enough”, they say.