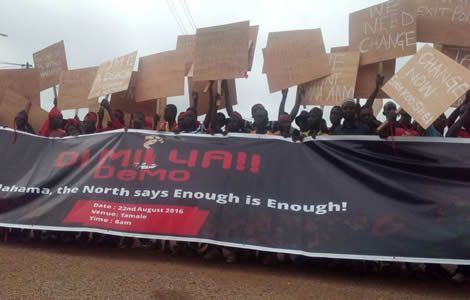 The coalition, led by the New Patriotic Party (NPP) and including the Convention People's Party (CPP), the Progressive People's Party (PPP), the National Democratic Party (NDP) and the All People's Congress (APC) are demonstrating over the 'harsh' economic situation in the country.

According to Peace FM's Northern Regional correspondent Achereba Kwabena, the demonstration which started peacefully, was nearly marred by the Azorka Boys had it not been the timely intervention of the police.

He said the Azorka boys from nowhere made themselves part of demonstrators around the 'Vodafone traffic light' in Tamale albeit with a different agenda; leading to a nar-violent confrontation. However the police were there to stop them and calm has been restored.

“The demonstrators have been on the streets since morning. But we don’t know where the Azorka boys came from, all we saw was that they had entered the crowd and the confrontation begun but the Police were at the traffic light junction so they stopped them,” he recounted.