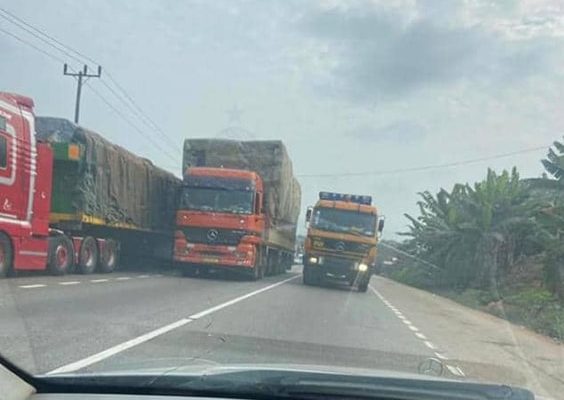 The Ghana Police Service has effected the arrest of an articulated truck driver by name Awal Mohammed for careless, reckless and inconsiderate driving on the Kumasi Accra main road.

This follows a complaint filed by a Ghanaian citizen about the conduct of the said driver at Kwahu Fodua on the Accra-Kumasi road.

In a photo shared on social media the articulated truck driver is seen overtaking on the wrong side of the road whiles cars were moving in the opposite direction.

The driver with vehicle with registration number GW 402 V has been arrested by the Police and has been charged for court.

A suspect driver, Awal Mohammed, aged 31 has been arrested and charged for court for the following offences:

The said driver was captured on video by a concerned citizen as he dangerously veered off his lane at a section of the road at Kwahu Foduah, and drove facing oncoming vehicles.