Police clamp down on illegal insecticide production facilities at Odorkor 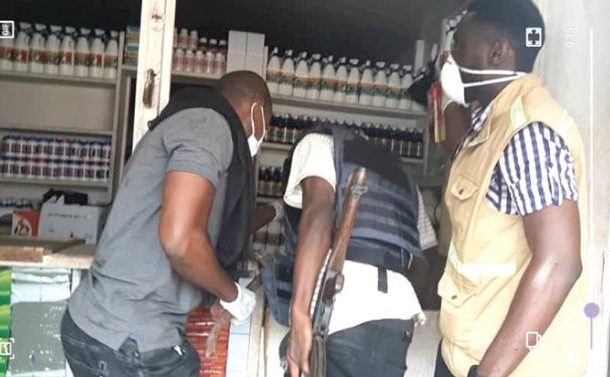 Police have led the Ghana Standards Authority (GSA) and the Food and Drugs Authority (FDA) to raid illegal insecticide production facilities at Otatten in Odorkor, a suburb of Accra.

At least ten persons were picked up for manufacturing the insecticides without the required permit during the swoop on Sunday afternoon.

State-owned Daily Graphic newspaper reports that the Director-General of the GSA, Professor Alex Dodoo, said the presence of the makeshift factories posed "danger to about 1.4 million people living within a 2.1-kilometre radius in and around Odorkor”.

“He [Prof Dodoo] said thousands of residents of the place and its environs were at risk of developing central nervous system disorders and related diseases due to the presence and the activities of the syndicate of illegal chemical producers,” the newspaper reported on its online portal.

According to the report, the swift operation lasted for about three hours.

Many of illegally produced insecticides were seized and the makeshift facilities were placed under lock and key.

"What we are witnessing now is an imminent health threat that must be contained immediately to forestall any escalation. There is also the need to demolish the area and decontaminate some of the facilities and houses around to assess the level of exposure to the houses and children around and see if corrective things can be done because the exposure has been there for a long time,” Daily Graphic quoted Prof Dodoo as saying.

Some residents told the newspaper that the activities of the illegal insecticide production facilities have for a long time been a nuisance in the community.
myjoyonline