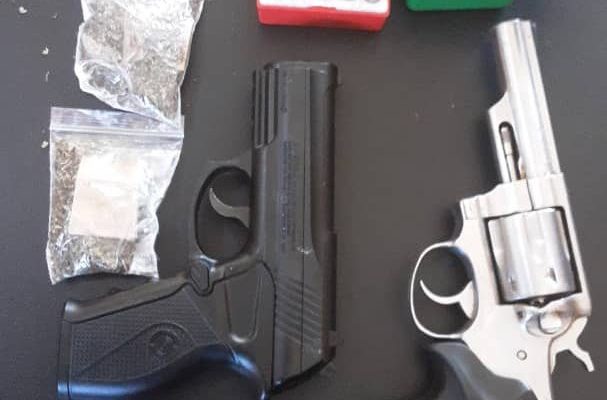 A man who was traveling from the Volta Region to Accra has been arrested for possessing two pistols and ammunition without lawful authority.

The suspect, Dominic Bimba, 39 was arrested by the Denu District Police on the dawn of Wednesday October 27, 2021.

The arrest was conducted by a Police Patrol team along the Tokor-Accra Road around 4:00am during an intelligence led stop and check operation.

DSP Efia Tenge, Head of Public Affairs at the Volta Regional Police Command informed the media that the suspect was on board an Accra-bound private car when he was arrested.

The Patrol team upon stopping the vehicle, searched all occupants on board; including the suspect.
Upon searching him, two foreign pistols and 61 rounds of ammunition were found in his bag.

Suspect Dominic Bimba who had additional two spent shells also in his possession was immediately arrested.

Preliminary investigation into the incident revealed that the suspect is a Togolese and resident at Tokor.

He told the Police that he was transporting the two weapons to someone in Accra.

DSP Tenge assured that the matter will be thoroughly investigated. She also appealed to the public to always furnish the police with prompt information.