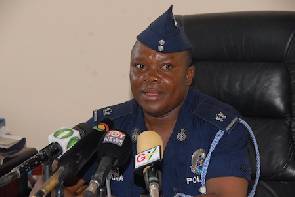 The Police Service has said it will look into a video which shows the founder of the International God’s Way Church, Bishop Obinim, flogging two teenagers with a belt during a church service for alleged fornication.

According to reports, the two, who had been taken in by Obinim, had engaged in sexual relations, resulting in a pregnancy which was subsequently aborted.

The Public Relations Officer (PRO) of Ghana Police Service Superintendent Cephas Arthur, stated that although he hadn’t seen the video, the police had taken notice of the complaints from members of the public.

He told Citi News that such an action, if proven, would constitute an abuse of the teenagers’ rights and that its Domestic Violence and Victim Support Unit (DOVVSU) would take the matter up.

“I haven’t spotted such a video but if there is such a video in circulation then it borders on human rights issues and the appropriate authorities will take action,” Cephas Arthur said.

“We are in a democratic dispensation. If it’s for the purposes of religion, that one will also be investigated. It will also be by the appropriate authorities and I hope the right things will be done to ensure that human dignity is restored. When I say appropriate institutions, we have DOVVSU, anti-human trafficking unit and we have other units so let us see it first.

For all you know, some station or division of the police has seen it already and perhaps they are working on it.”

The video, which has gone viral on social media and appeared to have been recorded from a TV broadcast, showed Daniel Obinim, beating the two repeatedly with a belt while hurling insults at them in front his congregation. He asked the boy if would be able to take care of the girl and a baby while still in school. The girl, at one point, ran away, but was caught and restrained as she was beaten by Obinim.

She broke away from her captor and run to Daniel Obinim’s wife, Florence Obinim, who was seated on the stage. Florence, who is a gospel musician, moved away from her after her husband shouted at her to do so, in order for a second church hand to continue beating her with his belt . The disturbing video has provoked widespread criticism of the controversial preacher.

This isn’t the first time questions have been raised about Obinim’s actions. The eccentric preacher has often been called out for his unconventional methods.

Obinim was seen stomping the stomach of what looked like a pregnant woman continuously, in a deliverance service He was dragged before a court on charges of “vandalising the property of an Accra-based radio station” and was criticised by the Ghana Pentecostal and Charismatic Council (GPCC) for verbally assaulting its 1st Vice President, Rt. Rev. Sam Korankye Ankrah.