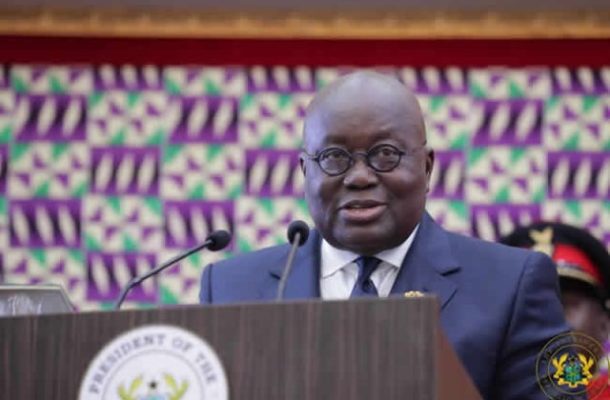 President of the Republic H.E Nana Addo Dankwa Akufo-Addo has charged Ghanaian and all stakeholders in the football industry to help bring back the love.

In 2018 the football landscape was beset with damning corruption scandal after investigations by ace investigative journalist Anas Aremeyaw Anas uncovered pervasive corruption within the fabric of the game.

With top football officials, referees, match commissioners and others fingered in the scandal, football was brought down to its knees for almost a year.

Before Normalization Committee stepped in with the support of government and FIFA to help weed out the anomalies in our game.

Kurt Okraku was elected after the Normalization Committee concluded their one year job of helping streamline the beautiful game in our nation.

Speaking on Thursday at the State of the Nation's Address in Parliament,the President H.E Nana Akufo-Addo congratulated the GFA boss and charged Ghanaians to help him bring back the love.

“Government worked with FIFA, established the Normalization Committee and helped bring a new GFA into being. I am happy to note that football, the passion of the nation has returned to full normalcy, following the election of a new President of the Ghana Football Association (GFA), Mr Kurt Okraku.

“I congratulate him on his election. The Ghana Premier League has started and let us help “Bring Back The Love.”

“It was with considerable reluctance that Government had to intervene in the administration of football, when we decided to dissolve the old GFA because of the bribery and corruption that engulfed its operation,” he added.

The new GFA since assuming office adopted the moniker #BringBackTheLove and it is catching on a lot with Ghanaians who mostly use Social Media as it's trending.

Also there has been a conscious effort to hype the Ghana Premier League and the response on various Social media platforms has been encouraging.