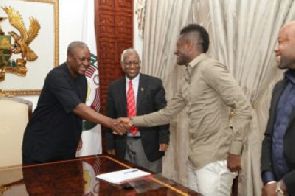 Ghana president John Dramani Mahama has hailed the leadership qualities of Asamoah Gyan as he draws an analogy in seeking for a second re-election bid.

John Mahama has been campaigning in his native country ahead of the crucial elections on December 7.

He says he is tested like the former Sunderland hitman and urges voters to keep him in power.

"When the likes of Asamoah Gyan and Abedi Pele are playing, spectators and analysts always criticise and suggest that given the opportunity, they will play better. But when you field him, they give off a lethargic display, he said to the cheering NDC supporters.

"We are winning and you want Dede Ayew and Asamoah Gyan to be substituted so a rookie can play, it does not make sense, he quipped.

"Talking is the easy part. Even a child can do that but if you have not been tried and tested you cannot deliver, he jabbeb.

President Mahama will square off with his main challenger Nana Akufo-Addo for a shot at the presidency on December 7.

The election is expected to be keenly contested with political watchers predicting a potential run-off.