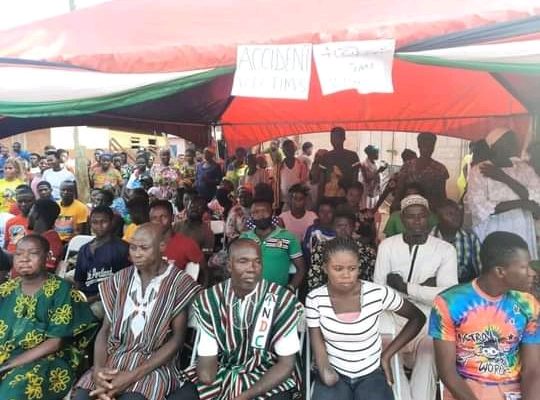 My eyes are wet with tears as I write. I am just imagining how it feels moving around without a leg or an arm which you have been used to all your life. I just can't get it as I sit . Things people go through for the love of the umbrella .

The Ejura constituency and the NDC party at large were hard hit in November 2020 during the electioneering campaign .

As part of the thank you tour in the Ashanti region, His Excellency John Dramani Mahama has insisted to first meet the families of the deceased and the maimed .

It was a sorry scene to behold . His Excellency John Dramani Mahama stood for minutes in front of them.
He shook them by their left hands because that was all they had .

The one who could shake him by his right hand, didn't have one of his legs .

The branch chairman, who himself was a victim spoke on behalf of the victims. As a farmer, he first mentioned his ordeal of living without his right hand.

He said he would have been happier if the accident had affected his left hand because holding the machetes by his left has been a difficulty.

With all these, he assured the President that they are not heart broken. They know what he had done for the people of Ejura and Ghana as a whole. They are still committed NDC members and will still do everything possible to ensure the party comes to power .

He however pleaded with the former president and the NDC to come to their aid . Things have been difficult for them so if there can be a fund to support them, they will be grateful .

Chairman Ofosu Ampofo ahead of the president assured the victims that those who have lost their limps and arms , will be catered for and will never be forgotten. The party will make sure they don't regret being a part of the party.

His Excellency John Dramani Mahama in an extremely solemn voice thanked the chief and people of Ejura. He recounted how he got the news on that faithful day on the 21st of November, and the efforts of the doctors and nurses. They were extremely diligent he said .

No amount of money can bring those who lost their lives back. But he will not also see them go through life with pain and their deformities. He will sponsor their further medical treatments and ensure life treats them well.

He also spoke against the level of impunity in this country. The security unfortunately have become trigger Happy. See what happened at the last riot here in Ejura, where military personnel aimed and shot at citizens of this nation .

These officers, behaved exactly like the military officers who came to shoot at the Ayawaso West Wuogon by-election. How many more people will be shot with bullets that we used our taxes to buy?

Speaking on the Ejura committee, he said he prays the report will not be whitewashed or thrown to the dustbin like that of the Ayawaso West Wuogon where 60% to 70% of the recommendations were rejected .

He mentioned a regrettable transfer he heard about the district health officer who gave his account at the committee sitting.

How can you transfer a medical superintendent to a health centre? Anyway, we must all wish him well in his future endeavours he concluded.

Before taking his seat , he asked for a minute of silence for all those deceased and asked for the souls of the deceased to Rest in Perfect Peace.