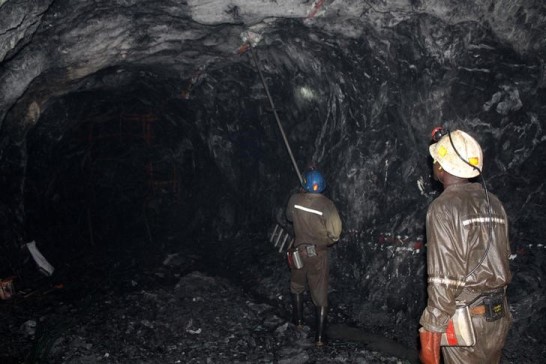 Mine workers are pictured at the Freda Rebecca gold mine in Bindura town February 7, 2015. REUTERS/Philimon Bulawayo

Commercial gold production in one of Ghana's oldest underground mines, the Prestea Underground Mine, will resume in the middle of next year after 14 years of undergoing redevelopment, care and maintenance.

This follows the successful raising of a $150 million stream loan by the mine owners, Canadian’ Golden Star Resources (GSR), in May last year; part of which will now be used to revitalise the mine.

Of the total amount, $40 million will be used this year to refurbish, reshape and replace obsolete equipment at the century-old mine to enable it to resume productions by mid-2017, the company's global Director of Investor Relations and Corporate Affairs, Ms Katharine Sutton, told reporters in Takoradi in the Western Region.

"The money will generally be used to modernise the infrastructure, retrain our staff and strengthen safety on site," the General Manager of the Prestea Underground Mine, Mr Jerry Agala, said in a separate discussion.

Still on the loan, Ms Sutton said the other US$40 would go into similar activities at the company's sister operations at Wassa, also in the Western Region, while the remaining US$10 million would be used as "sustaining capital" for GSR's surface operations in Ghana. The company currently runs two operations in the country, including the Wassa Open Pit and Underground Mine, which it acquired in 2003 from Standard Bank at US$16 million.

The $150 million loan was secured from USA-based gold miner and stream financier, Royal Gold, in a special arrangement that would see GSR repay through gold produced from the mine. Under the agreement, the lender is entitled to 240,000 ounces of the precious metal, Ms Sutton said.

According to her, estimates showed that the mine would produce 70,000 to 80,000 ounces of gold in a year should it successfully resume production on the scheduled date. That figure will, however, not materialise fully in 2017, given that production will possibly take place for only six months of next year.

This is not the first time GSR has announced intentions to restart gold production at the century-old Prestea Underground Mine, which it bought in 2002 from a joint venture, comprising of the Ghana Government and the Ghana Mineworkers Union.

In 2013, attempts to resume operations there were thwarted by the steep fall in gold prices.

And just last year, the company announced it had secured funding to restructure the mine for production to resume this year. That also did not materialise due to some technical and commercial challenges.

Ms Sutton, however, explained that next year’s production dateline would not be postponed due to the availability of the funds and the commitment of Royal Gold, the financier.

"This is a stream loan we secured from another company and they are monitoring our operations quarterly. So, we have that responsibility to deliver and we believe that production will commence in mid-2017," she said.

Prestea is one of the oldest mining communities in the country and West Africa as a whole, whose residents grew up with gold mining as their native profession.

The collapse of the mine in early 2000, therefore, shattered many economic activities in the area, resulting in thousands of residents and migrants losing their jobs.

Mr Agala, who has been the GM of the Prestea Mine since 2011, said the successful revival of the mine in June 2017 would be a positive start to bringing back those good old days.

"The people of Prestea are so passionate about the coming back of the mine. Their whole lives are built around gold mining.”

“So, the revitalisation of the mine will give them hope," he said.

He, however, admitted that the recent modernisation of the mining business and the aggressive infusion of technology into the sector meant that less labour would be required compared to what pertained in the olden days.

As a result, he asked for measured optimism on the part of people seeking employment in a revived Prestea Underground Mine.