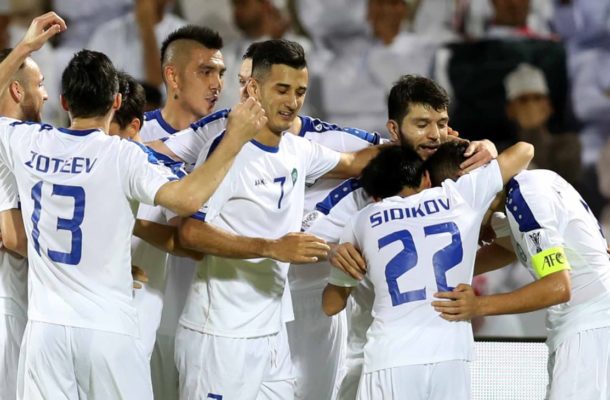 
With three points in the bag after their 2-1 win over Oman, the White Wolves can seal their place in the Round of 16 with a win over their neighbours, and continue their impressive record of not missing the knockout stage since 2000.

Speaking ahead of the tie, Cuper said he had been impressed by a Turkmenistan side which led Japan before ultimately losing 3-2 in their opening match.

"Turkmenistan had a really good performance against Japan, which is one of the big sides of the Asian continent," said the former Inter Milan and Valencia boss.

"We can theoretically watch them and analyse them but it's really different to see them on the pitch.

"They are a team with good discipline and, moreover, they are very good down the left wing. These are the main advantages of Turkmenistan, but each team has their own style and will play their own football.

"The team that will win will be the better prepared team for this game."

Uzbekistan's success against Oman, sealed in the 85th minute by Eldor Shomurodov, was their seventh win in their past nine AFC Asian Cup group stage matches dating back to 2007.

Their recent record in Asia's major championship is admirable and, in Cuper, they have a head coach with the experience of guiding Egypt to the 2017 African Cup of Nations Final.

Cuper's Egyptian outfit were known for an airtight defence, which navigated their first four games without conceding a goal, but the Argentine said there is different blueprint for his current side.

"I think we have nothing to do with Egypt," he declared. "Our game style is not like the one I was implementing with Egypt."

"It's different. There may still be some similarities to how we played as Egypt, but the system that we play is completely different."

"Nowadays it's difficult to calm the fans, because you should win the game, you should have more possession of the ball, you should give a good performance. To make everyone content can be difficult."

Turkmenistan approach Sunday's clash boosted by their impressive introduction against Japan, with a thumping opener from Arslan Amanov and Ahmey Atayev's late penalty contributing to a performance which pushed the four-time champions all the way.

"it gave us confidence," said head coach Yazguly Hojageldyev. "The result wasn't good for us but it gives is good confidence for the team. Nevertheless, we made small mistakes in the game so, we will try to erase these mistakes from the game.

"Of course we still have a chance. Any positive result will give us a boost and our first points. We still have two games."

The two sides have rarely met on the international stage in recent years, although they did cross paths in Turkmenistan's last appearance at the AFC Asian Cup Finals in 2004, with Uzbekistan winning 1-0 to eliminate their regional rivals, not that it is of any interest to Hojageldyev.

"I don't see this game as (a chance for) revenge. It is just history," said.

Uzbekistan will be without suspended central defender Egor Krimets, while Ignatiy Nesterov and Jaloliddin Masharipov are one yellow card away, as is Turkmenistan's Vezirgeldi Ylyasov.