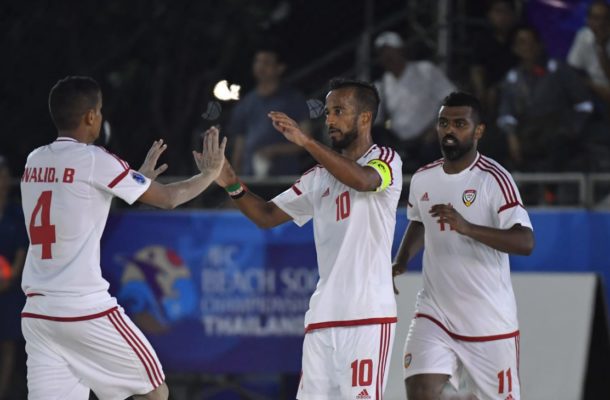 
The Emiratis were in fine form in their first outing on Thursday, registering the opening day's biggest with with a 6-1 success over debutants Kyrgyz Republic.

The 2017 runners-up were highly impressive, creating near-constant goal scoring opportunities throughout the full 36 minutes, but Almaazmi isn't making any title predictions just yet, preferring to focus on his side's next challenge.

"My plan is for us to take it step by step. We have finished the first match, now we can think about the next game with China and after that, we can start to think about Lebanon," he said.

"It's very important that we got three points from the first match, and now I can think about the next three points.

"My most important goal is to give happiness to the people of the United Arab Emirates."

In direct contrast to the UAE, China PR endured a difficult tournament in Malaysia two years ago, scoring three and conceding 24 goals in four consecutive losses.

But they showed vast improvement in their first competitive outing under decorated Spanish boss Ramiro Amarelle, pushing a strong Lebanon side, who reached the semi-finals in 2017, in an eventual 5-3 defeat.

Amarelle was heartened by his side's performance in a match they led twice, but believes a lot more work needs to be done for his adopted country to become a competitive beach soccer nation.

"We need time. Our players are doing their best and giving 100 per cent of their concentration and effort," he said.

"It was a good game for us, unlucky for the final score, but I think we did a good job and we are going on the right way. Obviously we are not happy that we lost the match, and with two teams aiming for the same goal, one of them can't get it.

Having gone toe to toe with Lebanon, an even bigger test now awaits, with UAE boasting the pedigree of five FIFA Beach Soccer World Cup appearances.

"The problem is the UAE have a higher level than us," Amarelle explained.

"We will try to remain on this level, but it will more difficult, for sure, because they have a lot of quality players with a lot of experience in the World Cup.

"For us, it will be more difficult, but also a challenge, again, to learn. We wake up with 100 per cent mentality to learn from the (match against) UAE. We will fight for sure."

In Saturday's early kick-off, Kyrgyz Republic will look to revitalise their hopes of appearing in the knockout stage in their first trip to the tournament, after they produced a strong, but ultimately unsuccessful showing against the United Arab Emirates.

The Central Asians impressed many with their performance - none more so than Emirati boss Almaazmi, who revealed his surprise at their quality after the match - and head coach Muktarbek Orozbakov is hopeful their fighting debut will engender confidence for the games to come.

"Lebanon is also a strong team, but we are ready to play with them in the next game," said the 43-year-old mentor.

"From the experience of the first match, we will try to take confidence and we will make sure we train a lot. For the further matches we hope success will be on our side."

Lebanon paved their road to the 2017 semi-finals with wins in their first two matches, and their opening day success against China PR gives them the opportunity to repeat the achievement in Thailand.

Head coach Alex Braga was satisfied with three points on day one, and is sure his side will remain focused on the next challenge.

"Our next match is against Kyrgyz Republic and we are expecting another very, very hard game. If we win, then we can start to think about the quarter-final."