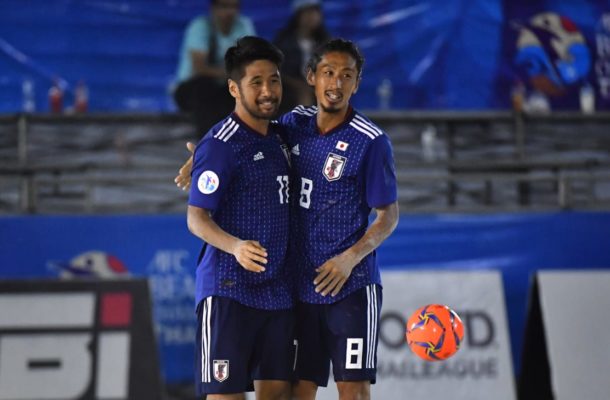 Pattaya: Eight goals against Kuwait weren't enough to satisfy Japan head coach Ruy Ramos, who called on his side to keep it simple against Qatar in their second Group C outing at the AFC Beach Soccer Championship on Sunday.


The East Asians had several moments of brilliance in their opener, with Shusei Yamauchi, Ozu Moreira and Takaaki Oba providing seven goals between them as Kuwait were well beaten.

But his side's surge to the top of Group C, Ramos was far from content with what he saw on Friday.

"I'm not satisfied with the performance," said the former Japanese football international.

"Its better than we play more simple, and have less mistakes in the game. It's better also that we take full control of the game and play to our strengths."

"If we're satisfied, we cannot go further. We need to keep it simple and cut out the mistakes."

Winless in 2017, Qatar were largely competitive in their first match against Bahrain, and found themselves within striking distance at 3-2 down with six minutes remaining, but late goals to Salman Al Yaqoobi and Abdulla Al Abdulla consigned them to defeat.

Abdullah Jassim's side aren't expected to get quite as close to Japan, but will at least be hoping for a better showing than when the sides met in the previous edition of the tournament, when Ozu scored four goals in a 14-0 thrashing.

Meanwhile, Sunday's other Group C clash promises to go a long way to deciding the complexion of the group, with Kuwait and Bahrain to face off in Sunday's early match.

With three points already secured, Bahrain go into the tie knowing any further points could secure their place in the last eight, while Kuwait simply can't afford to leave the sand without a positive result.

Despite Kuwait's 8-1 loss to Japan, head coach Ahmed Abdelrazek remains full of optimism, confidently predicting his side will beat Bahrain to and become one of Thailand 2019's quarter-finalists.

"Yes I saw (Bahrain's) match, and I am sure that we will go to next round along with Japan," he declared.

Abdelrazek is attempting to spearhead a beach soccer revolution in Kuwait, who he hopes can follow in the footsteps of his native Egypt, who rose to become an internationally competitive side - and currently sit 12th in the world rankings.

But, with three-quarters of his squad over the age 30, Abdelrazek said he must deal with the fact that his current squad has a distinct lack of emerging players, with 27-year-old goalkeeper Mohammad Al Shaer the youngest in the 12-man squad.

"In Egypt's national team we had the younger players who were physically fit and ready for everything," he explained.

"Here with Kuwait the average age is too high, and that's the big difference between Kuwait and Egypt national teams."

The AFC Beach Soccer Championship Thailand 2019 continues until March 17, with the top three nations to represent Asia at the FIFA Beach Soccer World Cup in Paraguay later this year.
Fixtures