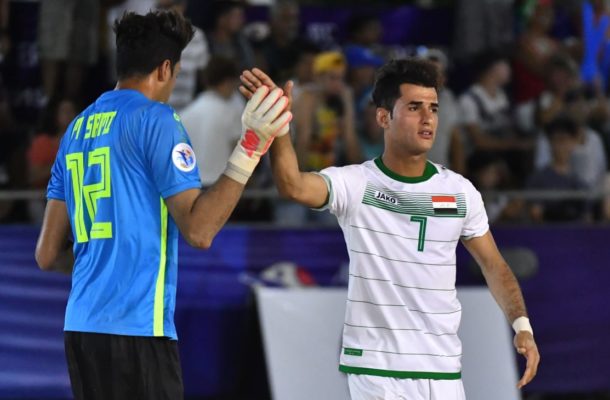 
Moghaddam's side took the lead against Team Melli, and made life difficult for the holders, who only pulled away with two late goals to claim a 5-2 win.

Progression to the last eight remains a possibility for Iraq, but only if they they can pick up points against Oman on Sunday, and Moghaddam senses possibility, both in the short and longer term.

"We now have to play better against Oman, because we now have a chance to qualify for the second round," said the Iranian.

"For sure, we have improved, because the first time Iraq played against Iran, I think it was 11-1 (for Iran), but now my players are improving."

Iraq endured a punishing 2017 campaign, conceding 19 goals in three matches - including 11 against Japan - but they impressed against the world number two Iranians, even drawing praise from Japan star Ozu Moreira.

Moghaddam says Iraq needs time to evolve, but agrees the future is bright for the nation.

"We need experience and a good program for beach soccer from the Iraq Football Federation in the future," he said.

"Now our players understand better when playing against big teams, and with more time and more support, I hope Iraq can play better than today and reach higher levels in the future."

Oman are the only side yet to get their competition started in Pattaya, but the West Asian side certainly shouldn't be overlooked.

They are one of sia's traditional beach soccer powers, appearing at the FIFA Beach Soccer World Cup in 2011 and 2015, and no doubt looking to atone for their 2017 AFC Beach Soccer Championship group stage exit.

The Omanis were less than a minute away from reaching the semi-finals in Malaysia 2017, but two very late Lebanese goals shattered their dreams of a third World Cup qualification in six years.

With Iraq having already played the first of their two group matches, even a one-point penalty shootout win will be enough to confirm Oman's place in the quarter-finals.
Fixtures